The IRS regularly publishes studies on various aspects of the tax system.  One of their studies, updated in July 2010, reviewed income and taxes paid for the period 1986 to 2007.

Over the thirty years since 1987, the majority of taxpayers have made a beggars bargain by voting for politicians who promised lower tax rates. During that time, many taxpayers have received a tiny decrease in their ETR while top income earners have seen a 15% decrease.

Below is a chart comparing the ETR for various income brackets in 1987, the year after the reform act, and 2007. 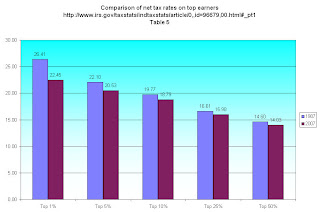 In 2007, what income bracket did you fall into?  The chart below shows the top half of all adjusted gross incomes.  If you made $33K or more in 2007, you were in the top half of income earners in this country. 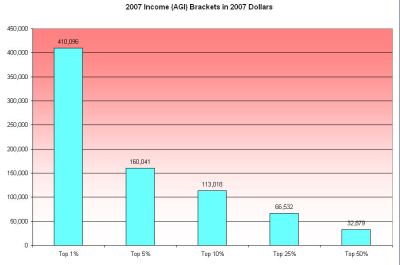 The highest earners have enjoyed the biggest reductions in their ETR over the past thirty years.

During the past election cycle, there was much debate about increasing the marginal tax rate on the top incomes in this country.  Republicans made significant electoral gains and quashed any attempts to increase taxes, resulting in a compromise this past December that left tax rates unchanged.

Some voters objected in principle to ANY increase in taxes.  Some voters objected in principle to an increase on only a small minority of taxpayers, maintaining that the tax pain should be shared so some degree by all taxpayers.  The minority of voters who wanted the tax burden to fall heaviest on the upper income taxpayers might have been able to win the argument, particularly among moderates, if they had proposed an across the board 5 or 10% increase in income tax rates.  An increase of 10% in a 35% income tax bracket is far more than a 10% increase in a 15% tax bracket.  Instead, Democrats proposing a “soak the rich” tax policy change watched in horror as the electorate shifted Republican in many states.  “Soak the rich” tax proposals seem to violate some sense of fairness in the American voter, even those who are not rich.

Below is a comparison of 1987 individual and corporate income taxes adjusted for inflation and population growth with the actual taxes collected in 2007.

Tax collections in 2007 were far stronger than the 1987 pace BUT the federal government is spending money at a faster rate than 1987. Below is a comparison of adjusted 1987 on-budget Federal spending – which excludes most of Social Security – with the actual amount spent in 2007. 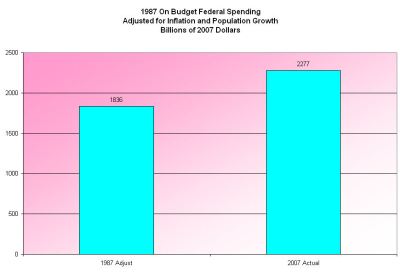 As Republican presidential candidates prepare to announce their candidacy, we can be certain that the debate over higher taxes vs. reduced spending will only heat up further.  Proponents of higher taxes can point to the charts above and make a good case that the top 5% of incomes have enjoyed greater tax reductions than the rest of us over the past thirty years.  Proponents of reduced spending can make a valid case that the federal government has just gotten too big. There is no resolution to the debate.  Some people want the federal government to take a greater role in our lives – some don’t.  The only “solution” is a compromise – cut some Federal spending, including defense, and bump up taxes an equal percentage on most American taxpayers.

The Federal government has a revenue problem.  Both personal and corporate income tax collections are down.  The charts below show individual income taxes for the past 60 years and a smoothed average of those amounts. (Click to enlarge in separate tab) 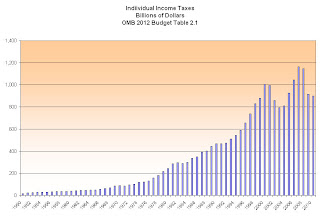 Below is the same data smoothed with a 4 year moving average to show the overall trend. 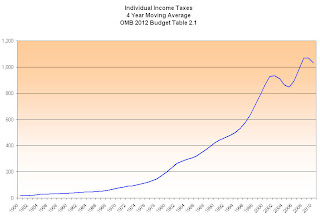 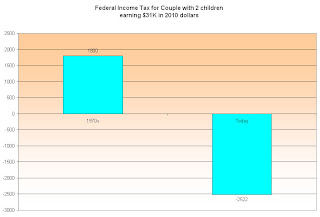 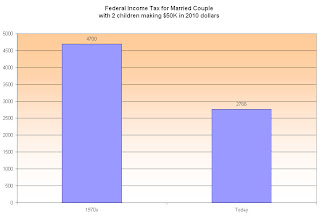 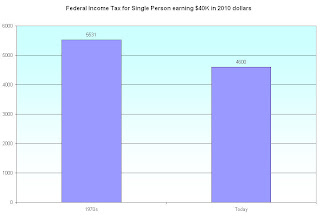 In the past 30 years, the taxpayers of America wanted lower taxes and they voted in the politicians who would give them lower taxes.  Many of us wanted more environmental and labor regulations, social support programs and we got those too.  Many of us voted for more defense and we got that.  Military bases mean jobs for a lot of voters and voters like jobs.  So who is going to pay for all of this?  “Not me,” we all said.  “Get it from the other guy,” we moaned.

Reducing the debt of this nation will require changes in both tax revenues and spending.  Impose more taxes on those in ALL income brackets, not just the rich.  There aren’t enough rich people to make up the yearly deficits. For all but the very poorest in our country, there should be a minimum income tax, even if it is only $100, so that everyone has some “skin in the game.”

Consolidate duplicate regulatory government departments which overlap in their oversight responsibilities.  Well meaning and egotistical congresspeople want their own agencies supervised by their committee and the result is a hodge-podge of agencies.

Reduce spending, beginning with Congresspeople themselves.  If tax revenues decrease, then the budget allowance of each Congressperson’s office should be reduced by the same amount.  While the millions of dollars involved are negligible within the scope of the entire Federal budget, it enshrines a principle that if taxpayers are tightening their belts, so should their elected representatives.

Make a dedicated effort to detect fraud and overcharges in defense and entitlement programs and prosecute the perpetrators.

If we continue to put off these decisions, it will only get worse.  Each year, as we have to pay more in interest on the nation’s debt, programs will continue to experience budget cuts, provoking an economic and class warfare that may permanently scar the spirit of the people of this country. We owe it not only to our kids but to ourselves to make some difficult but prudent choices soon.

Big Daddy in Washington got big pockets.  He gets money and gives money.  Big Daddy collects income taxes and then pays all that money out to people who need it for something – school, food, housing assistance, disability, training and many other programs.  Big Daddy got a big hole in his pocket and here’s why.  The way it’s supposed to work is that Big Daddy pays out what he collects in individual income taxes – money in, money out.  If you look at the mid decade years in the chart below, you will see the way it’s supposed to work – approximately the same amount of money went out to the needy as what came in from those who weren’t needy. Those that got give to those who don’t – and all that charity goes through Big Daddy’s pockets. 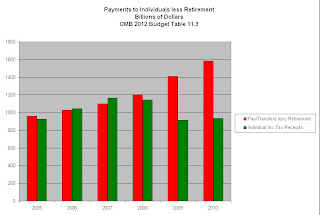 The green bars are individual income tax receipts.  The red bars are the payments of all the Federal social assistance programs not including Social Security, railroad and military retirement.

Instead of sending our income tax to Big Daddy in Washington, each of us could just walk over to our neighbor down the street who is having a hard time for one reason or another and give them our income tax.  But we wouldn’t get to fill out income tax forms which is an exciting way to spend a weekend or two.  The person who needs the money wouldn’t get to fill out long applications for student grants or housing assistance or food stamps.  Long applications and supporting documentation are fun things to do so we wouldn’t want to deprive people of that joy.

The past two years show clearly what the problem is.  Lots of money out and not enough money in.  So what’s Big Daddy gonna do?  The Green People tug at Big Daddy’s pants and say “Hey, Big Daddy, raise taxes on the rich people!”  The Red People kick Big Daddy in the ankle and say “Big Daddy, you got to reduce payments to all these needy folks!”  Big Daddy sure has got a heap of problems.