2010 marked the demographic closing of the “Greatest” generation of the Great Depression and WW2 and the start of the Boomer generation, when the Boomers born in 1946 reach 65.  During the past twenty years, the Greaters, I will call them, and their children, the Boomers, have contributed the most to shaping public policy.  Those over 45 vote the most frequently and in greater concentrations than younger generations.  The overwhelming majority of politicians at the national level are over 45.  Earning power tends to peak in the 45 – 64 age range so it is that generation that contributes the most in taxes as a percentage of the total.  As a demographic, those in the 65+ age consume more federal tax dollars.  Politically and economically these two generations have a dominant influence on the nation.  So how has it been going? 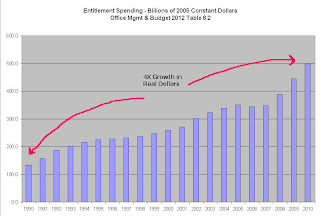 Chiefly responsible for the rise of assistance spending has been Medicaid.  Below is just the federal component of Medicaid spending, in real inflation adjusted dollars, over the past 20 years. 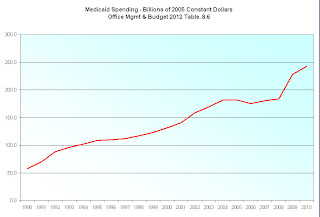 For most of the past twenty years, states and local communities contributed about 70 cents for each dollar that the Federal government spent. (Source – (CMS) Centers for Medicare and Medicaid Services)  As part of the stimulus program, the states only kicked in 50 cents for each Fed dollar. As these stimulus funds run out this year, many states will be hard pressed to meet accelerating Medicaid costs. 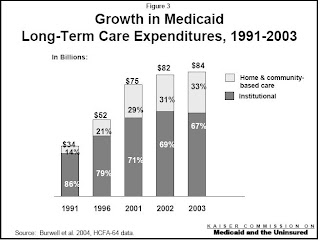 The growing sophistication of medical technology has enabled the Greaters to live longer and better than their parents did.  Body parts wear out but can be replaced or repaired.  A dying moment can be postponed for several days or weeks or months with the use of critical care and life support systems.  Much of that care gets charged to Medicare.  Below is a chart of Medicare spending in inflation-adjusted dollars. 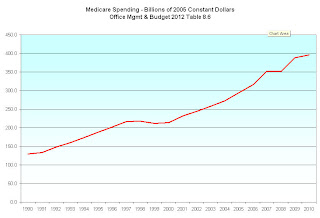 Medicare covers some disabled and others but it is primarily a program for seniors aged 65+.  Let’s look at the total Medicare cost divided by the number of seniors so that we get a per senior cost.  This is not the actual per person cost but the process enables us to make some projections. Over the past 20 years, the per senior cost of Medicare has grown, in inflation adjusted dollars, by 67%, a rise of 2.6% per year over inflation.  Using that growth rate, I estimate a per senior Medicare cost of over $11,000 in 2015. 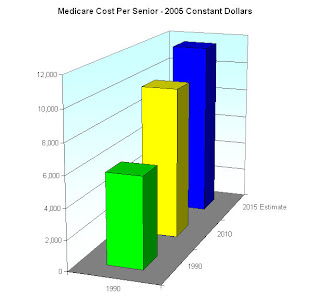 How are these rising costs being paid?  A Kaiser Family Foundation analysis of 2009 Medicare revenues found that the premiums that seniors pay each month for Medicare B (doctor’s bills) accounted for only 13% of Medicare costs (Page 12).  Payroll taxes made up 38%.  Income taxes pay 44% of the cost.  If Medicare is truly an insurance program and we want to subsidize health care for our seniors, why do we take almost half the cost of this “insurance” program from our income taxes?

Math time:  47 million seniors x $11,583 (my projected average cost per senior in 2005 constant dollars) = $544 billion, over half a trillion dollars.  My methodology gives a 2015 estimated total cost of $70 billion more than the Obama 2012 budget estimate of $473 billion in 2005 constant dollars and hey, I could be wrong.  Perhaps the ratio of disabled and other recipients of Medicare won’t increase as fast as the senior population growth.  Perhaps there will be savings under the new health plan.  Perhaps the government will crack down on the fraud and abuse in the Medicare system.

So what to do?
1) Cut down on fraud and abuse.  Make changes to the timeliness of the Medicare payment system so that more claims can be reviewed before being paid.  Spend more money on field agents who can inspect newer medical facilities to ensure that they are legitimate.  Use database technologies to scan for doctors who are billing Medicare for far above what the average physician in their specialty in that geographic area bills Medicare.
2)  Reward efficiency.  There is much talk of payments based on outcomes, not procedures.  Such a program will be difficult to implement and follow but it promises savings.
3) Pay up for our values.  If we are going to support the health of our senior and disabled population, then we need to pay for it directly.  Lower the Medicare tax rate and tax all income regardless of its source.  We reach into the general tax revenue kitty to subsidize seniors so that they can have affordable monthly Medicare premiums.  If that reflects our values,  let’s take that cost and add it to the payroll tax rate.

We can do this.