On Friday, the Bureau of Economic Analysis (BEA) released their monthly report of personal income, the total of income from wages, salaries, government benefits, interest and dividend payments and rental income.

In this country there is a feeling that something fundamental is wrong. Many are waking up to the fact that the national myth of Equal Opportunity may be just that – a myth. For decades, people have started small businesses using the equity in their homes to survive the cash flow crunch of the first years of a small business. The decline in housing prices has left many without that traditional capital cushion.

A few weeks ago I wrote about the decline in the median income over the past decade.  Today, let’s look at the big picture of personal income.  Below is a Federal Reserve chart of inflation adjusted personal income for the past fifty years. (Click to enlarge in separate tab) 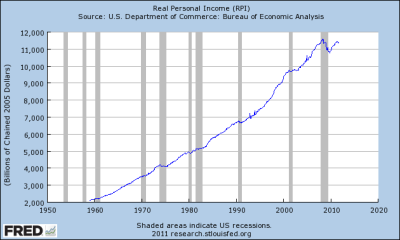 After a big dip in the past recession (shaded on the chart above), total personal income has returned to about the level it was at the start of the recession in December 2007.  Below is that same chart zoomed on the past five years of inflation adjusted income.

To see the underlying strength or weakness of income, we need to take out transfer payments, which are government checks for benefits of all types.  After all, this is just tax money taken from Paul to pay Peter. The Federal Reserve conveniently gives us that data.

A zoom in on the last five years of inflation adjusted personal income shows the economic sickness that many people vaguely know in their hearts.  After rising from a trough in the 3rd quarter of 2009, real personal income has stagnated the past year.

What this data doesn’t do is adjust for the increase in population.  Although the Federal Reserve charts per capita disposable personal income, they do not chart real personal income less transfer payments on a per capita basis.  Using population figures from the Census Bureau, I was able get a picture of the income data, one that has serious implications for the future. 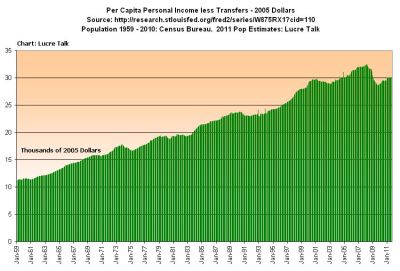 As the boomers retire in ever increasing numbers they will be receiving Social Security checks, a transfer payment, which will put downward pressure on personal income less transfer payments.  The long term chart of personal income less transfer payments reveals a familiar and disturbing pattern familiar to stock chart watchers – the head and shoulders pattern – which indicates a dramatic drop in the future.  Confirming this ominous sign are the uncompromising unemployment figures – over 16% of the working age population is either un- or under-employed.  How are these fewer workers with relatively stagnant real incomes in the production of goods and services going to generate enough tax revenues to pay for the increasing transfer payments?