A strong retail report for December and an improvement in sentiment among small business owners buoyed the market at the start of the week.  Both reports continue a trend that indicates a healthy economy:  results are at at the upper bound or above expectations.

The latest report of  jobless claims at 325,000 pulled the 4 week average further down away from the psychological mark of 350,000.  This is sure to reassure short to mid term traders.  The weak BLS employment report released a week ago may have just been an anomaly.  Other employment indicators, as well as retail sales and business production simply do not confirm the headline numbers from the BLS.

The Consumer Price Index for December showed a mild 1.5% year over year increase and will reassure the Fed that its stimulus program poses little danger of igniting inflation. 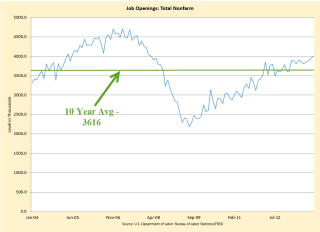 The number of people who voluntarily quit their jobs continues to climb over the past year.  Employees quit when they feel more confident about job prospects. While this metric has been improving, it is only at the lowest levels of the past decade. 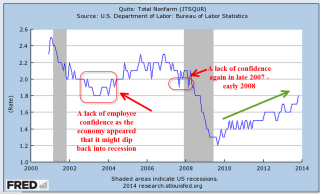 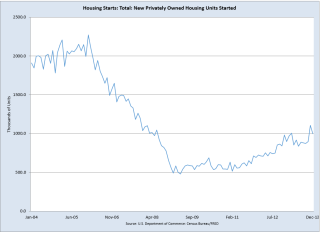 Let’s get a bit of perspective. There is a decided shift downward from the post war building boom.  Below is a graph of  housing starts adjusted for population growth. 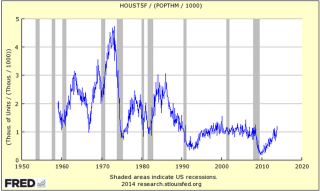 Starts of single family homes have not yet reached the lows of past recessions.  The words “improvement” and “recovery” should be viewed in the context of these abysmal lows. 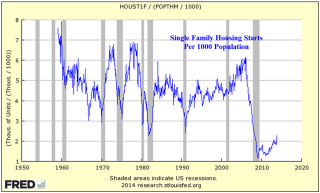 *******************************
The Consumer Price Index (CPI) for December showed a year over year increase of 1.5%.  I believe this understates current inflationary pressures on consumers but it is the official rate, one that the Federal Reserve will use to guide policy.  The low rate will help allay fears that continuing stimulus will spur inflation in the near term.

*******************************
Stock prices will be driven largely by earnings reports at this time.  About 10% of SP500 companies have reported this past week, too few to get a solid feel yet for the past quarter.  62% of companies have beat expectations, a bit less than the more normal 70%.  The market is largely trading sideways as it digests both the past quarter’s results and the forward guidance that companies give when they report.  IBM, Johnson and Johnson, and Verizon kick off this holiday shortened week when they report earnings on Tuesday. McDonald’s, Microsoft, Proctor and Gamble, and Netflix are due to report this week as well.  There don’t appear to be any significant market moving economic reports coming up this week.  Existing Home Sales on Thursday might have some minor impact and traders will be watching the continuing trend in new unemployment claims.