Ding, ding, ding!  I was surprised to see that this is my 500th blog article!

As I noted last week, the stock market has traded in a fairly tight range for the past six months.  Some market seers see this as a topping pattern before either a crash or a serious correction.

Last week I estimated the equity market at about $25 trillion.  The latest Federal Reserve Flow of Funds report puts the value of corporate equities at $22.5 trillion at the end of March.  A time series graph of the Fed’s valuation of non-financial corporate equity might give an investor some pause as it is 50% above the worst case scenario base trend line. 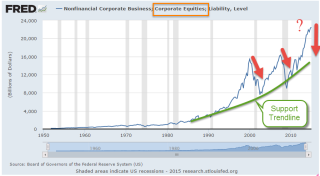 Using a middle of the road trend line, we see a market valuation that is 20% above trend. 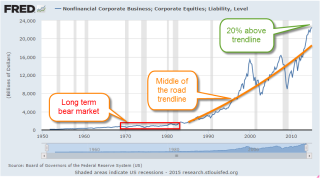 On the chart above, I have outlined the long term bear market from 1968 – 1982.  That 14 year period of negativity might be a poor starting point for a trend line for the following thirty years.  Let’s take government debt out of the picture for a minute and look at the ratio of household and non-financial business debt to corporate equity valuations.  As the graph below shows, climbing stock prices (the divisor in the ratio) lower the ratio of debt to equity and signal a growing confidence in the future- or does it signal an overheated market? 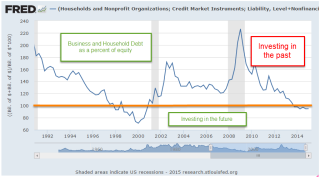 Let’s add in government credit market debt, which will shift the ratio of debt to equity up. 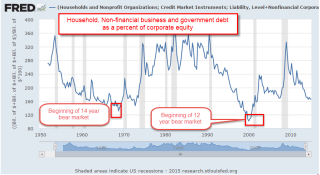 We can see the stock market peaks in 1968 and 2000 when the market entered a long term decline called a secular bear market.  Notice that the ratio at the start of the financial crisis in 2008 is about the same as today but that neither was at a peak or trough level.  Now let’s add in the credit market debt of the financial sector. 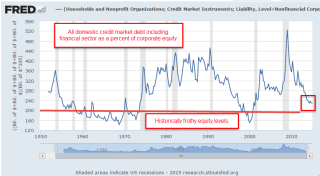 This again raises the percentage of debt to equity and subtly changes the pattern of the ratio.  We see the go-go years of the 1960s as a decade of confidence, perhaps too much confidence fed by an upsurge in defense spending.  Rising inflation, debt and the slog of war began to erode that confidence and lead into the secular bear market that started in 1968.

In the late 1990s we can see the ratio approach the same levels as in the late 1960s.   It is in this chart that we see a revealing characteristic that marked the period before the financial crisis.  Although stock market prices were rising, housing market debt was rising as well so that the ratio of debt to equity stopped falling after the recession of 2001 and the start of the Iraq war.  That halt in the debt-equity ratio signaled an uncertainty in future profits, tugging new investment dollars toward the past.

This trend of accumulated debt attracting new investment dollars is clearer if we reverse the ratio, showing the equity/debt ratio.  In the 1990s, equities climbed and the equity/debt ratio climbed as well.  In the mid-2000s, equities again rallied but the equity/debt ratio stayed relatively flat, indicating that investors were putting dollars into debt instruments as well as the stock market.  Since the financial crisis, equities have climbed far above the market levels of 2007 but the debt/equity ratio has recovered at a much slower rate.  Despite historically low interest rates, high government debt and finance debt continues to attract investors’ money. 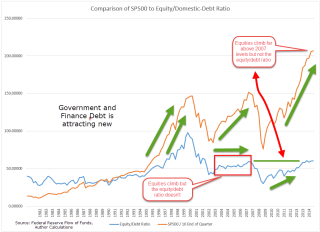 Current stock market valuations are moving the ratio toward the future but investment in the spending of the past continues – until the 30+ year bull market in bonds reverses and investors abandon a falling bond market for the equity market.