The behavior of bonds, their pricing and their yields (the interest or return on the bond), can seem like a mystery to many casual investors.  As this Money magazine writer notes, the language is backwards.  Yields rise but that’s bad because prices are falling.  Prices rise but that’s bad for new buyers who are getting a low yield on their investment.   The article mentions a little trick to help keep it straight – convert the yield to a P/E ratio, something more familiar to many investors.

In Montana, a “spread” might be a large ranch but on Wall Street the term often refers to the difference in yield between a safe investment like a 10 year Treasury bond and an index of lower rated corporate bonds, or “junk” bonds. Investors want to be paid for the extra risk they are taking.  As investors get more worried about the economy and the growth of profits, they worry about the ability of some companies to pay their debts.  Debts are paid from profits.  Less profit or no profit increases the chance of default.

Some call the spread a “risk premium,” and when that premium is less than 5 – 6%, it indicates a relatively low to moderate sense of worry among investors.  Anything greater than 6% is a note of caution.  In the chart below a rising spread above 6% often signals the coming of stock market swoons.  When I pulled this chart earlier in the week, the rate was 6.19%.  On Friday, the rate was climbing toward 6.3%.

This 2004 paper from the research division of the Federal Reserve gives a bit more depth on credit spreads and their movements.

In a September blog post I noted the elevated inventory to sales ratio, meaning that manufacturers, merchants and wholesalers had too much product on hand relative to the amount of sales.  There is a bit of lag in this series; September’s figures were released only a week ago.  At 1.38, the ratio continues to climb. 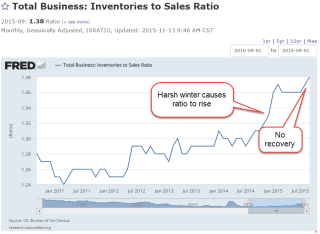 In the blog links to the right is an article by Wade Pfau comparing the “annuity” that Social Security provides with those available on the commercial market.  He also analyzes the extra return one can achieve by delaying Social Security until age 70.