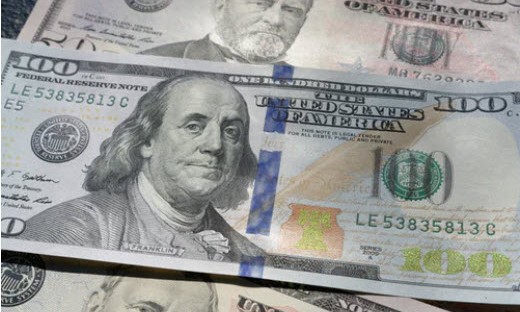 When I took some money out of the ATM this week, I was surprised to see a note scrawled on one of the bills. “Stupid money 2002,” it read. I hadn’t thought about that money in a while and here it was paying me a visit. In those years, my accountant had me on a program of investing regularly every month. The stock market was down 20% from the highs of the dot-com boom that ended in 2000. I didn’t know it at the time, but the market would lose another 30% before hitting bottom. I certainly didn’t like putting money in the market only to see it disappear down a black hole.

“You’re not investing in money,” she advised. “You’re buying shares in profit machines, the top companies in the country. Dollar cost averaging buys more shares when stock prices are low, fewer shares when prices are high.” Ok, fine, I said. I kept shoveling money into a black hole. Two years later, that stupid money had turned into smart money. An Invesco analysis found that investors more than doubled their money even when they invested at the middle point of a stock market downturn (Watts, 2020).

When we withdraw money for retirement income, a child’s education, or to start a business, the money is not separated into stupid and smart. Money is fungible. It can’t be separated. Let’s say I give my child $100 to buy some books for school. The next day he is wearing a new set of headphones and I’m angry. “I didn’t use the $100 you gave me,” he says. “I used my birthday money.” I can’t tell the difference.

That’s a problem for the Senate and House as they draft bills to bail out large companies. Most of the windfall from the 2017 reduction in corporate taxes went to stock buybacks. Now companies complain that they don’t have enough reserves to weather the current crisis.

After receiving bailout funds during the last crisis a decade ago, large companies paid hundreds of millions of dollars to their executives while they laid off millions of workers. Richard Trumka, the President of the AFL-CIO, voices the concerns of many lawmakers when he calls for provisions against the companies using this year’s bailout money for stock buybacks and executive bonuses (C-Span, 2020). In response to a question from reporters at Saturday’s COVID-19 press conference, President Trump agreed that he wants to see a provision against using funds for stock buybacks in any proposed legislation. Will Washington politicians do the right thing? An army of corporate lobbyists and lawyers work tirelessly to suck as much money out of Washington as they can.

How will voters judge Mr. Trump’s response to this crisis? Is this his Katrina? Will there be an election this November? The political viewpoints in this country are so disjointed that voters from each side see the facts through their own ideological filter.

While our leaders call for unity, let’s be on guard against our own pack instincts. Many years ago in New York City during the gas embargo, I watched a man get beat up over one gallon of gas. He didn’t wait his turn.

Photo by Colin Watts at Unsplash.com

Watts, W. (2020, March 21). As Dow wipes out over 3 years of stock-market gains, here’s a warning about calling the bottom. [Web page]. Retrieved from https://www.marketwatch.com/story/as-dow-wipes-out-over-3-years-of-stock-market-gains-heres-a-warning-about-calling-the-bottom-2020-03-21?siteid=yhoof2&yptr=yahoo