Sitting down?  Good.  Put the kids to bed?  This is not suitable for young minds.  Below is the number of employees per capita during the past fifty years.(Click to enlarge in separate tab)

Job growth after the recessions of the 1960s, 1970s and early 1980s were fairly steep.  The declines in employment were fairly mild in the 1960s and 1970s.  The back to back recessions of 1980 through 1983 led to the first sizeable drop in employment but that became the new normal for employment declines.  In the early nineties, we experienced another equally dismal decline and the employment recovery this time was not so hearty but eventually employment levels exceeded the previous peak before the recession.  In the beginning of the 2000s, we experienced yet another steep decline but this time was different.  China had joined the World Trade Organization (WTO) in 2001 and many manufacturing jobs were shipped off to newly built facilities in China.  Our labor market has never recovered.  The housing bubble during the 2000s led to some growth but we never surpassed the peak before that 2001 recession.  Per capita employment is now at the same depressed level that it was in the early nineties.

During this election season, we are hearing a lot of rhetoric about job growth and job loss but it is mostly focused on the past 4 – 5 years.  We need to step back and understand just how long this sub-standard job growth or job recession has been going on – over a decade.

The swell of the boomer generation is only just beginning to retire.  Some in their early sixties who have lost a job and can’t find another have simply given up and are retiring early, taking an involuntary 25% cut in retirement benefits for the rest of their lives simply because they need the money to pay the rent or mortgage, to buy food and pay the utility bills.  Look at the chart again and understand that job growth policies need to be dramatic to climb up above the employment peak of 2000.  What is dramatic?  Tax incentives for businesses to relocate factories in the U.S. and tariffs on imported goods to protect American manufacturing.  Over the past decades, politicians on both sides of the aisle have chopped away at tariffs until the U.S. has the lowest tariffs of all developed countries.  With each decade have come more tax and employment policy disincentives to hire workers here in the U.S.

Which candidate for President or Congress has discussed or advocated policies that would dramatically spur growth?  None that I have heard.  “More drilling for oil” or “more energy jobs” may add some jobs but the number is insignificant in relation to the problem.  “Infrastructure investments” may likewise promote some jobs in the construction industry but the job gains are tiny fractions of the large scale job growth we need.

Look at the graph again – this time without my scribbling.  Every gray horizontal line is 6 million jobs.

Let’s zoom in on the past 13 years. Each gray line is 3 million jobs. 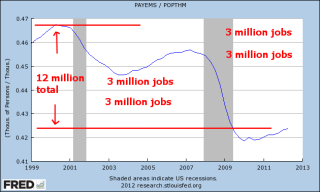 To reach just the same level of per capita employment at the peak of 2000, we need 12 million jobs!  So here’s the question I have for all members of Congress and for both candidates for President:  what policies do you advocate that will help create 12 million jobs?