Until the end of the year, we will hear and read a lot about the expiration of the Bush tax cuts.  For those who want to extend all the Bush tax cuts, you will hear stuff like this: “The non-partisan Congressional Budget Office (CBO) has predicted a recession in 2013 if the Bush tax cuts are allowed to expire.”  As with most political claims, this is slightly true.  Remember that politicians are little more than magicians practicing a logical sleight of hand in order to convince you of some claim.  What the CBO actually said in a May 2012 report was “if the fiscal policies currently in place are continued in coming years, the revenues collected by the federal government will fall far short of federal spending, putting the budget on an unsustainable path.” (Source)  In the next sentence, the CBO cautions “On the other hand, immediate spending cuts or tax increases would represent an added drag on the weak economic expansion.”  Is there room for compromise in this dysfunctional Congress?

While many politicians are aware of the difficult trade-offs, they dare not mention that to voters, who, they presume, are stupid.  On Fox News, MSNBC and other media, we will continue to hear simplified versions of a complex debate because – well, we’re just too dumb to pay attention to complex arguments that involve math.  If you are like most voters, many politicians reason, you have already stopped reading this because it has too many adjectives, verbs and commas.

The CBO does its best to estimate the long term impact on the federal budget and economic activity as a result of a paticular policy. To illustrate just how difficult this task is, let’s look at a July 2007 letter from the CBO to the Congressional Budget Committee projecting “For 2008 through 2011, CBO’s baseline budget projections show deficits of $113 billion, $134 billion, $157 billion, and $35 billion, respectively.”  Deficits were actually $458 billion, $1,413 billion, $1,293 billion and $1,300 billion.  Actual deficits were almost ten times what the CBO projected!  Knowing that ten year projections are almost pure fantasy, Congress continues this practice.  Each party uses the CBO estimates to support or attack a particular policy. 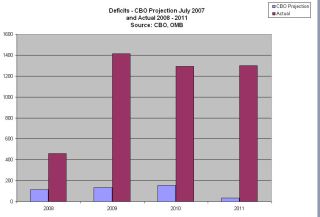 The CBO projects a recession in 2013 if ALL tax policies were allowed to expire, including the Bush tax cuts.  “These include the Bush tax cuts, the alternative minimum tax (AMT) patch, the temporary payroll tax cut, and other temporary expiring provisions, many of which are commonly referred to as “tax extenders.” (Source)   The Congressional Joint Committee On Taxation (JCT) has a complete seven page (!!!) list of “temporary” tax cuts that are due to expire at the end of this year.

What is the bottom line for the individual taxpayer if ALL the fiscal policies, including the Bush tax cuts, were allowed to expire?  In a 2012 report by the Congressional Research Service, they cite estimates by the Tax Policy Center that, in 2010, “the Bush tax cuts resulted in the lowest 20% of taxpayers seeing their income rise by 0.5%, while the top 20% saw their after-tax incomes rise by 4.9% and the top 1% saw their income rise by 6.6%”. (Source).  What will be the impact on most taxpayers if the Bush tax cuts expire?  Some but certainly not as dire as some politicans predict.  But that is not how politicians get votes.  To get us to the polls, politicians and their pundit lackeys who appear on TV and radio talk shows try to breed fear in voters.  The media is happy to oblige; fear makes for better ratings.

Based on estimates from the Tax Policy Center and the IRS, below is a comparison of what 2012 tax rates would be with and without the effect of what are commonly called the Bush tax cuts. (Source) This is just a “what if” scenario since the Bush tax cuts are still in effect for the 2012 tax year, but it does give us a good guesstimate of the effect of letting the tax cuts expire.

Using that data, I have projected what the effective tax rate on adjusted gross income would be for 2013 if the tax cuts are allowed to lapse.  It includes the tax brackets that includes the majority of tax payers.

The couple making $40K in adjusted gross income would pay $645 more in Federal income taxes.  The couple making $80K would pay $2225 more; the couple making $120K would pay $6669 more.  Those in the top 20% would see tax increases of $16K and more.  It is understandable that taxpayers with income in the millions would want to keep their gravy train going.  They need government mostly to protect their property rights; everything else, all the regulations and social support programs, is just wasted tax money.  Most of the rest of us don’t like paying taxes either.  We could step up to the plate and pay down some of the debt that we have run up; or maybe we should just let our kids figure it out.