A less than forceful President Obama appeared in Denver this past Wednesday at the first of three debates in the closing weeks before the November elections. (The Secret Service was rather more forceful, mandating a shut down of the main north-south highway through town during the debate.)  Republican contender Mitt Romney showed more preparation and assertiveness but unfortunately left some of the facts behind in his hotel room.  Neither candidate can look the truth in the face.  Mr. Obama’s repeated claim that his economic plan saves $4 trillion uses many discredited (even by his sympathizers) gimmicks to arrive at that figure and yet he continues to trot out the assertion.  Mr. Romney really wants us to believe that Congress is going to jeopardize their jobs by taking away popular tax deductions in order to pass his 20% rate cuts.  Congress will pass the rate cuts, which are good for re-election.  Take away the mortgage interest deduction?  We’re not betting on it, Mr. Romney.  The end result of his tax plan and his pledge to increase military spending would be a $2 trillion deficit, double the annual deficit we are currently running.

There are any number of fact checks on claims by both Mr. Romney and Mr. Obama during the debate.  Here is a fairly short summary from several Associated Press writers.

Then Friday morning, the heavens parted and the voice of – no, not God – the Bureau of Labor Statistics issued forth in their monthly pronouncement on the state of the job market: “The unemployment rate decreased to 7.8 percent in September”.

Throughout the country millions of pundits, economists and average Joes and Bettys stopped in disbelief and reached for their ear trumpets.  Had they heard right, they wondered?  Tweet, tweet, tweet went the twittersphere.  Blah, blah, blah went the blogosphere.  Lies, lies, lies went the right wing cons over at Fox and dance, dance, dance went the lefties at MSNBC.  For the first time in his presidency, Mr. Obama has seen the unemployment rate drop below 8%.

Had a large number of people simply given up and left the work force, causing them not to be counted as unemployed?  This has been a characteristic of the decline in the unemployment rate earlier in the year.  But not this month.

Was the number of jobs created particularly strong?  Not this month.  At 114,000, job growth was not strong or weak and probably not enough to keep up with population growth.  A third of that job growth was in the health care sector.  A nation that continues to show its greatest growth in taking care of an aging and poorer population is not building a foundation for sound long term economic growth.

Many of the unemployed simply did the best they could do – get a part time job.  The number of involuntary part timers increased by more than a half million this past month. From the BLS Employment Release:

“The number of persons employed part time for economic reasons (sometimes
referred to as involuntary part-time workers) rose from 8.0 million in August
to 8.6 million in September. These individuals were working part time because
their hours had been cut back or because they were unable to find a full-time
job.”

There are good and bad trends that cause the unemployment rate to fall.  The two most problematic of the bad trends are 1) unemployed people simply giving up, and 2) involuntary part timers.  We have now seen both of these trends this year.

The steep drop in discouraged workers contributed to the decline in the unemployment rate.

“Among the marginally attached, there were 802,000 discouraged workers in
September, a decline of 235,000 from a year earlier. (These data are not
seasonally adjusted.) Discouraged workers are persons not currently looking
for work because they believe no jobs are available for them.”

Below is a 10 year graph showing the level of discouraged workers. (Click to enlarge in separate tab) 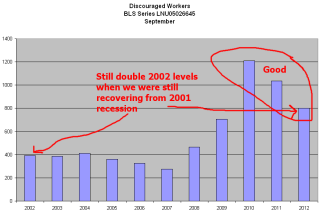 Another contributing factor was the revision in the number of net jobs gained in the two previous months.

“The change in total nonfarm payroll employment for July was revised from
+141,000 to +181,000, and the change for August was revised from +96,000 to
+142,000.”  Last month, many were scratching their heads when the BLS released their August report showing a dramatically lower number of jobs gained than reported by the payroll processing company ADP. It seems that some companies may have been too busy hiring to fill out and turn in their August BLS survey form.

Discouraged workers comprise part of a larger total of 6.4 million people who want a job but have not actively looked for one in the past 4 weeks.  A year ago, in Sept. 2011, the figure was 5.9 million.

Homebuilder stocks have been on a tear this year but construction employment, at 5.5 million, has barely budged in the past 3 years.

The core work force, those aged 25 – 54, continue to show some improvement but still have not reached the post-recession level of late 2009.

In the larger work force, aged 25 and up, the number of employed has risen almost to pre-recession levels, indicating that there are more older people continuing to work when they can – at full or part time jobs. 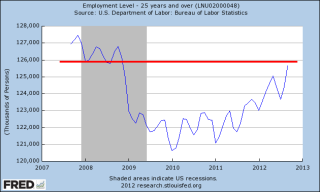 As the population ages, so too does the work force – a natural demographic change.  But older workers are not stepping aside for young workers just entering the work force.  Those who can work do so to compensate for the lackluster growth or decline of retirement funds and declining property values, the two chief sources of wealth that a person builds over a lifetime of work. Below is a graph of workers aged 55 and older.

The number of hours worked per week edged up slightly – a good sign.  But – “over the past 12 months, average hourly earnings have risen by 1.8 percent, ” the BLS report notes, indicating that family earnings are just not keeping up with inflation.

On the bright side, we are doing better than much of Europe which is probably already in recession.  Returning to the topic of debates, did we hear either candidate offer a recovery plan for … not this past recession but the one that will probably occur during the next Presidential term.  “What!!!???” you say, “we haven’t even gotten out of this past recession!”  The law of averages, like the law of gravity, is a pesky, problematic force of nature.  The 1960s and the 1990s are the only two decades in the past century where we did not witness a recession within an eight year period (Source), yet few Presidential candidates dare to discuss the eventuality of such a thing.  Even the Congressional Budget Office does not factor in recessions to their ten year budget projections unless the recession is ongoing.  As the Presidential contender, Mr. Romney must play the part of the man with a plan.  After four years, Mr. Obama probably understands that “hope and change” is little more than rousing rhetoric; that the President must steer the raft through dangerous currents without capsizing or losing any passengers, while the other political party rocks the raft enough to make his task even more difficult.  Should Mr. Romney win the Presidency, he will discover the same sobering truth.