So how did we get here?

The Bureau of Labor Statistics (BLS) estimates the total number of workers at 135 million.  More than 55 million people are currently receiving some form of benefit under the Social Security program, a ratio of about 2.5 workers per beneficiary.  In 2011, 2.6 million applied for retirement benefits while one million applied for disability benefits.  In the past 40 years, the number of retirees receiving benefits has doubled, the number of disabled has more than doubled.  Both disabled and retiree claims have declined since 2010.  (Fast Facts) 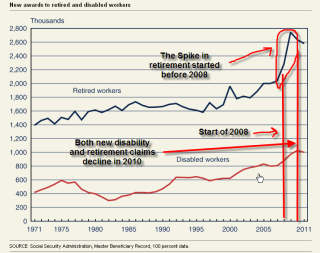 There is a demonstrated increase in disability applications when the unemployment rate rises.  As one guy with a bad back explained to me, “I’d rather be working scheduling service calls.  I worked in the heating and cooling business for almost 30 years.  After looking for a year, I gave up.  Who’s gonna hire a 60 year old guy with a bad back in this economy?” 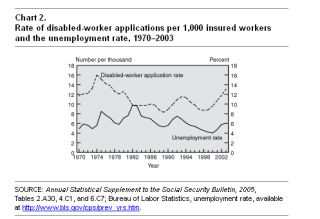 The number of retirees has doubled but the population has grown only 50%.  The growth of women in the workforce has contributed to the growth in retirees and in disability claims. 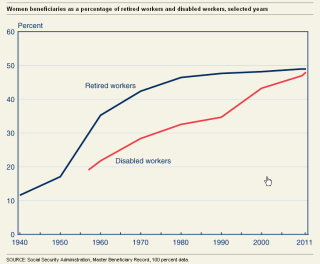 So I want to distinguish between obligation programs like Social Security, and entitlement programs.

What are more properly called entitlement programs are those programs for the unfortunate and the vulnerable, whose financial circumstances qualify them for some kind of income assistance program.  Many have paid little in income taxes over the years for any number of reasons.  Some are children, some don’t or can’t work, some work but make so little that they owe no taxes.  Some may have paid a good share of income taxes in the past but found themselves in a bad way in recent times.  There are a lot of programs: SNAP(food stamps), SSI (Supplementary Security Income), and TANF (traditionally called welfare), to name but a few.

Let’s look at one program: SSI, an income assistance program for the blind, disabled and aged, whose beneficiaries comprise a mere 2.5% of the population.  The SSI program is paid out of general revenues, not Social Security taxes. In 2011, blind and disabled recipients made up 86% of the total of about 8 million. (Source)  The average monthly benefit is about $500. The cost of the program is about $50 billion, or 1.4% of total Federal expenditures. 2% of the cost of the SSI program includes vocational training and other back to work programs. When some politicians talk about reforms to “entitlement” programs, they know that some of these programs are small but they cite examples of abuse, of someone gaming the system, because they hope that you don’t know that the programs are small.  Vote them into office and what they really want to chop are the big obligation programs, Social Security and Medicare.

However, there are some legitimate concerns in these small programs; the number of SSI recipients has grown 33% in the past 17 years. 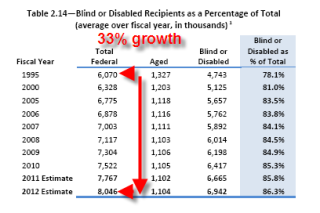 The number of disabled, aged 18 – 64, receiving income assistance under the SSI program has tripled in the past forty years, a growth rate six times that of the overall population. 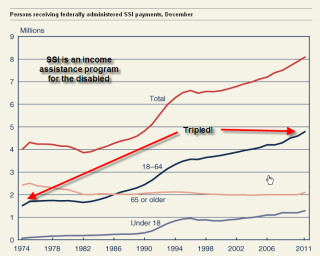 The SSI program also helps low income retirees, who have declined in real numbers by 15% in the past 16 years. 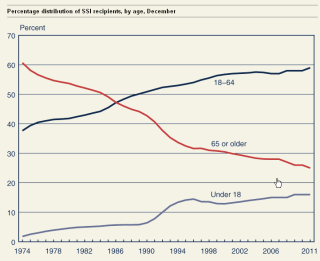 The percentage decline is explained partially by the explosive growth of the disabled who are younger than 65.  The number of women receiving SSI payments has also increased dramatically.

Let’s look at another entitlement program that Mitt Romney and Paul Ryan have targeted in their stump speeches: SNAP or Food Stamps.  “45 million people on food stamps!” is the cry of either of these candidates to illustrate the runaway spending in entitlements and the poor economy.  What neither will tell you is that the program cost $78 billion in 2011 (CBO source).  That is 2.2% of Federal spending.  Whatever reforms these guys propose to this program will save a very small percentage of the budget.  In that same report, the CBO summarized the characteristics of those on the program: “three out of four SNAP households included a child, a person age 60 or older, or a disabled person. Most people who received SNAP benefits lived in households with very low income, about $8,800 per year on average in [2010].”  I can excuse Mitt Romney because he may not be aware of the numbers.  There is no excuse for Paul Ryan, who is the “budget-meister” and certainly knows that any savings to a program this small is chump change in a budget of $3600 billion.

What both of them are counting on it that you don’t know that.  Their ultimate goal is to reform the big guy, Social Security, so that they can short change one type of federal obligation, Social Security recipients, to pay another obligation, the buyers of Treasury bonds.  Many of the large institutions that buy Treasury bonds are not suckers so Mr. Romney and Mr. Ryan turn to those with the least information – suckers who will vote for them.