A moment to acknowledge the personal caring and effort of ordinary people, the courage and doggedness of first responders during the superstorm “Sandy” and a heartfelt sympathy for those who lost loved ones during the storm.  Mile long lines of cars waiting for gas brought back vivid and unpleasant memories of the 1970s when many of us who lived in NYC would get up at 4 AM just to wait in line for a few hours to buy gas so we could get to work.  Resilience and persistence are bred into many New Yawkers (that includes you guys and gals in Jersey, too).  The clean up and repair will test every ounce of both during the next year.  Some losses, of course, are not the kind that can be repaired, only endured with the support of family and friends.

The October employment figures released two days ago showed an increase of 171,000 jobs this past month, about 50,000 more than expected and a welcome relief to the Obama campaign.  Retail and restaurant jobs posted strong gains and health care jobs continued their strong growth. 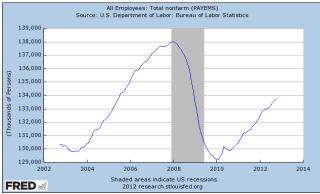 More people started looking for jobs, bringing the unemployment rate up a smidge to 7.9%. The year over year percent change in unemployment is relatively healthy, as shown on the 60 year chart below. 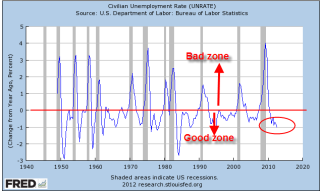 This past week came a series of positive reports.  Consumer spending rose .8% in September and home prices continue to improve, showing a .5% monthly gain in the Case Shiller index of 20 leading cities.  Both of these indicators have shown recent strength but the year-over-year gains for both consumer spending and home prices is a plodding 2%.

Consumer confidence has shown strong improvement the past four months and is expected to have about the same positive sentiment level as last month’s survey. As I noted last week, the consumer has lately shown more confidence than the business community.  The Chicago manufacturing index dropped last month and is now at a stall speed.  Tomorrow the national manufacturing report will be released.  The manufacturing sector is certainly responding to the weakness in Europe and slowing growth in China and southeast Asia.

The core work force of those aged 25 – 54 is showing a little upward movement over the past two years but is still anemic.

Most of the job gains are going to older workers above 55. “Get out of the way, pops!” may become the mantra of younger generations. 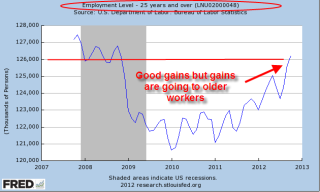 The loss in production jobs leads to a continual increase in the proportion of management and professional jobs.

Hourly Earnings gains are flat out terrible, hitting an all time low.

There are still too many people working part time because they can’t find a full time job.

The number of discouraged workers is declining but is not healthy. 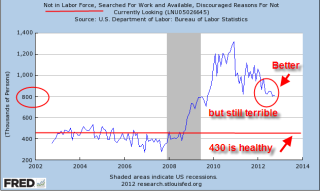 But after adjusting for population growth in the past decade, we have finally climbed back up to where we were 8 years ago.

To show the correlation between retail spending and employment, I’ve overlaid an index of one over the other. 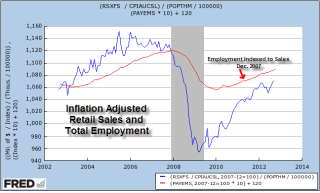 As you can see, retail sales lead employment gains and losses.  I sincerely hope that retail sales will continue to improve and turn around the recent business pessimism.  My chief concern is the lack of competence and character in Congress on both sides of the aisle.  This coming election will do little to alleviate those concerns.