Over the next two months, there will be much debate over spending cuts as the debt limit ceiling approaches in late February.  For the past four years, the Federal Government has been running $1 trillion annual deficits. 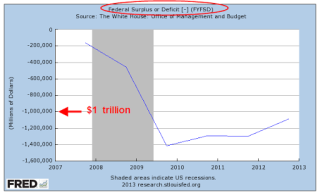 Deficits are the annual shortfall; debt is the cumulative amount of those annual deficits.  The total debt of the Federal Government, including money owed to the Social Security trust funds, is over $16 trillion, and is now more than the annual GDP, the sum of all economic activity in the country. 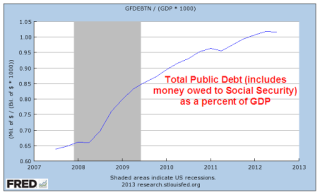 Republicans contend that the real problem with the budget is entitlement spending: Medicare, Social Security and Medicaid are the largest programs.  In the past ten years, spending on these three programs has almost doubled and now consumes 47% of the total Federal spending budget. 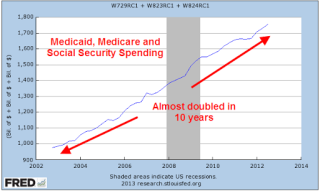 Spending increases on these programs will escalate now that the first wave of the Boomer generation has reached retirement age.  Too many rigid ideologues in the Democratic Party defiantly defend every penny of this spending.

On the other hand, defense spending is near WW2 levels.  On an annual basis, the current $700 billion we spend on defense is far less than the inflation adjusted levels of $1 trillion we spent at the height of WW2.

Wars may be won or lost at their peaks but the spending occurs over several years.  When we look at a moving five year average of defense spending, we are near the average of WW2.

Judging by the amount of money we are spending, we are fighting the third World War.  Yes, it’s a dangerous world but is it as dangerous as the state of the world during WW2?  Has Al-Qaeda, a loose coalition of stateless forces, subjugated Europe as Hitler’s armies did?  Is the threat of Iran comparable to the domination of Japan over the eastern seaboard of Asia during WW2?

In the late 50s, President and former General Eisenhower warned that the military industrial complex would invade the halls of Washington.  Preparedness is prudence, but Eisenhower knew firsthand that the industry peddles a self-serving culture of fear to those in Washington.  As high military spending becomes entrenched in the federal budget, regions of the country become dependent on the defense industry; those people send  politiicans to Washington to vote for more military spending and the spending cycle spirals upwards.

Each year, we are spending about $250 billion more than the 70 year average of military spending.  Unlike the spike of WW2 spending, the recent five year average has surged upwards like a wave – a wave that is drowning this country in debt.  As troubling as this is, we must remember that we are running $1 trillion deficits – four times the excess amount of military spending.  Those who say that we can balance the budget by cutting defense spending simply have not looked closely at the data.  We can not balance the budget by cutting only entitlement spending or only defense spending.  Even when we combine the two, we still can not balance the budget.

Which brings us to receipts, a gentle euphemism for taxes.  Economic bubbles inflate the amount of tax revenue to the government but the resulting lack of revenues after the bubble bursts outweighs the increased revenue while the bubble was building.

When we run a projection of revenues using more sustainable averages based on longer term trends, we come up with an optimized $3 trillion in revenues for the current year, still leaving us $600 billion short of current spending.

The solution then is a mix of four factors: more revenue from 1) economic growth and 2) tax reform; less spending for both 3) defense and the 4) social safety net.  These are not easy choices, particularly when partisans vigorously defend a particular program as though it were the last stand at the Alamo.