Economists cite a number of factors to account for the growth during the 1980s and 1990s, a period some call the “Great Moderation” because it is marked by more moderate policies by politicians and central bankers.  Causes or trends include less regulation, lower taxes, lower inflation than the 1970s, the rise of emerging economies,  and a more consistent rules based monetary policy by the Federal Reserve.  Often underappreciated, but significant, was the huge increase in consumer credit. Household spending accounts for 2/3rds of the economy.  A new generation, the boomers, emerging fully into adulthood in the early ’80s, welcomed the broader availability of credit.  Like their parents, the boomers took on the burden and responsibility of owning a home, the largest portion of a household’s debt load, but unlike the previous generation, the boomers sucked up as much credit as they could get for cars, clothes, vacations, home furnishings and the growing array of electronic devices.

When we look at the non-mortgage portion of household debt, the rate of growth is more restrained – a mere 80% increase in per capita real dollars.

The parents of the boomer generation, dubbed by newscaster Tom Brokaw as the “Greatest Generation”,  had been habitual savers.  By 1980, the personal savings rate was about 10% of disposable income.  By the middle of that decade, the Greatest Generation began retiring and withdrawing some of that savings.  Their children, the boomers, did not have a similar sense of frugality. 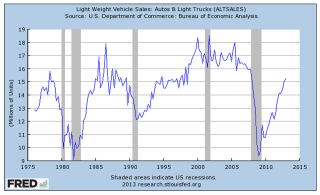 After thirty years of gorging on credit, households threw up.  The past six years could be called the “Great Diet” or the “Great Purge” to get over the three decade credit binge.

We can expect rather lackluster growth for several more years as households continue to shed those ungainly pounds debts.  Not only are households shedding debt but also certain kinds of assets. In 2009, the Federal Reserve reported that households and non-profit corporations owned $400 billion in mortgage securities like Fannie Mae and Freddie Mac.  In the first quarter of 2013, the total was $10 billion.  (Table of household assets and liabilities)

Households continue to keep ever higher balances in low yielding savings accounts and money market funds, indicating the high degree of caution. The big jump in deposits was probably due to higher dividends and bonuses paid in the last quarter of 2012 to avoid higher taxes in 2013.

For the past two weeks, global markets shuddered at the prospect of the Federal Reserve easing up on their quantitative easing program of buying government bonds.  Some have proclaimed that it is the end of the thirty year bull market in bonds, causing many retail investors to pull money out of bonds.  In several speeches this past week, Reserve Board members have reassured the public that quantitative easing will be here for several years.

As we have seen, households still shoulder a lot of debt weight, making it unlikely that either this economy or interest rates will experience a surge upward in the next several years.  An aging and more cautious population together with a declining participation rate in the work force indicates that another “Great Moderation” is upon us.  The previous moderation was one of political policy.  This moderation is led by consumers.  We can expect – yes, moderate, or lackluster – growth over the coming years.  The positive tradeoff for this subdued growth is the probability that the underlying business cycle of growth surges and corrective declines in economic activity will be subdued as well.