The monthly report of new housing starts was released Wednesday morning, the second day of a much anticipated meeting by Federal Reserve. On an annualized basis, builders started 891,000 homes, a 19% year over year increase. This figure includes both single family homes and apartment buildings. Starts were below expectations and may cause some Fed officials to postpone or soften their quantitative easing program.  (Note:  later that day, the Federal Reserve announced that they would not start tapering their bond buying program, a surprise that spurred a surge upward in the  stock market)

A 19% increase sounds great until we take a birds eye view of housing starts. 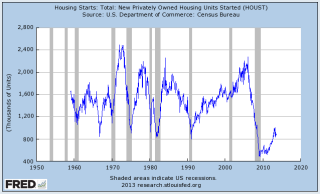 The 5 month average of housing starts has been declining since the spring. A decline in the volume of new homes sold is an early warning of recession.  Builders are motivated sellers and respond to changes in demand.  Because builders borrow money, called “bridge” loans, to manage their cash flow they are motivated sellers and respond more readily to changes in demand. 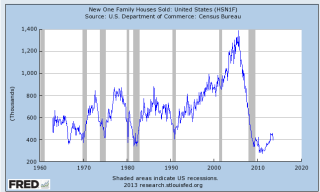 A common metric heard on the nightly news is the months supply of new homes for sale.  This is the inventory of new homes in a particular area.  More months is bad, less months is good but too little inventory puts upward pressure on prices.  New home inventory is low.

The months supply is a ratio of home sales to starts and can be misleading. The components of housing starts and sales tell another story.  Starts indicate confidence of builders in future home sales in their region. A thirty year graph of new one family homes started less one family homes sold shows a deep underlying caution among builders.  They got burned in this last downturn and are not sticking their necks out.

As the population grows, people need to live somewhere.  Below is the number of new privately owned housing starts per 1000 increase in the population.

This graph tells a different story than the usual “too many houses built” narrative.  The height of the 2000s boom was less than the heights of the 1970s and 1980s.  There were not too many houses being built but too many houses being bought by people who could not afford them.  Mortgage companies sold adjustable financing products designed to earn fees when homeowners refinanced every few years to avoid large interest rate increases.  Buyers were enticed by a hop-on-the-gravy-train mentality as housing prices rose dramatically, particularly in low income areas.

After the 2000 census, the Census Bureau summarized decades long shifts both in the type of housing and the characteristics of homeowners.   While there is a wealth of 2010 census data, I was unable to find a similar table that incorporated data from the recent census.  The Census Bureau notes that privately held housing starts do not include mobile homes, which grew to 7.6% of the housing stock in this country.   So the surge in housing per change in population of the 1970s and 1980s is understated.  This suggests that the new home market is not overbuilt but that people are less able or less willing to commit to owning a home than they were thirty and forty years ago.

Sales of existing homes, released Thursday, showed a recovery high of almost 5.5 million units on an annualized basis.  Realtors reported continuing strong demand in anticipation of rising mortgage rates.  The “churn” of existing homes is not a productive investment in and of itself since the home has already been built.  Sales in this category do generate fees for banks and realtors at the time of sale, and increased sales for Home Depot and remodelers as buyers remodel following the sales or sellers spruce up homes before they put them on the market.

The ratio of new spending per existing home is very small compared to the material and labor involved in building a new home.  The brisk pace of existing home sales does raise the valuation of existing homes, which leads people to feel that they are wealthier, which may induce them to loosen their purse strings.  Rising home values are good for those who own a home but increasing valuations make it that much more difficult for buyers trying to buy their first home.  People in their twenties and early thirties who are most likely to be first home buyers have been hit hard by the recession.

As the economy continues its muddling recovery and home prices rise, does this generation practice a stoic resignation as they look to the future?

One thought on “Home Sweet Home”