This week I’ll take a look at the latest home sales reports, a few trends in Social Security, and the latest reading in the Consumer Price Index.  Lastly, I’ll ask whether a home should be included in an investor’s bond allocation.

Existing home sales rose in June, topping 5 million but are still down 2.3% on  a year over year basis.  The Federal Housing Finance Agency reported that home price increases have slowed slightly, notching a 5.5% year over year gain. 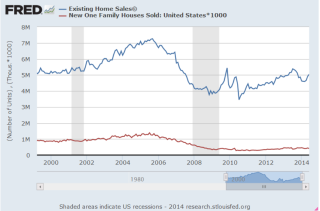 The comparison was a tough one because June 2013 was the best month for new home sales in the post recession period.  However, the year-over-year comparison of the three month moving average of new home sales shows a falling trend as well, down 6% from last year.  The decline began in January and shows little signs of improvement.

I will remind readers of a 2007 paper presented by economist Ed Leamer in which he demonstrated that falling new home sales tends to precede a recession by three to four quarters.  I wrote about it in February this year.

In contrast to the disappointing report on new home sales, jobless claims fell unexpectedly to 284,000, dropping the 4 week moving average to a post-recession low of 302,000.  No doubt this will raise expectations for a strong employment report next Friday.

When the U.S. Treasury collects more in Social Security taxes than the Social Security Administration (SSA) pays out in benefits, the Treasury “borrows” the money from the Social Security Trust Fund by selling it non-marketable Treasury bonds that the SSA holds.  The interest rate for each new bond is an average of the yields on intermediate and long term Treasuries. The Treasury credits this interest to the trust funds every month.  SSA has a web page where a reader can select a year and month and see the average interest rate that the trust funds were earning on that date.  In December 2013, the average annual yield was about 3.6%, down significantly from the 5.25% being credited at the end of 2005, when interest rates were higher.  At the end of 2012, the trust funds had a balance of about $2.7 trillion, earning about $100 billion annually, enough to make up the $75 billion shortfall each year projected by the Trustees of the fund.

The Disability Insurance (DI) portion of the trust fund is projected to run out of money by 2016.  This Do-Nothing Congress will not resolve the problem in this mid-term election year,  promising to make the issue a contentious one for the 2016 election cycle.  If the problem is not resolved by then, current law requires that benefits be reduced accordingly.  The Trustees estimate that Disability beneficiaries will get about 80% of their scheduled benefit.  Democrats will likely use the issue to paint Republicans as Meanies who care only about the rich and big corporations while Republicans portray Democrats as tax-and-spenders who buy votes with government charity.  It’s all coming to a TV screen in our homes.  Can’t wait.

June’s inflation numbers from the BLS notched a 2.1% year-over-year gain, slightly above the Fed’s 2% target.  The core CPI, which excludes more volatile energy and food prices, is up 1.9% y-o-y.  Gasoline jumped 3.3% in June but year over year gains are at target levels of 2%.

Over the next few years, we will hear increasing calls for a switch to what is called a chained consumer price index, or C-CPI.  The chained index attempts to more closely replicate a cost of living index by taking into account the substitutions that consumers make in response to changes in price.  The CPI may calculate that the Jones Family bought the same amount of hamburger meat even when it rises 20% in price.  The Chained CPI calculates that the Jones Family may buy a little bit less hamburger meat and a bit more chicken if chicken remains relatively stable in price.  The two indexes closely track each other but the CPI tends to be slightly higher than the Chained CPI. 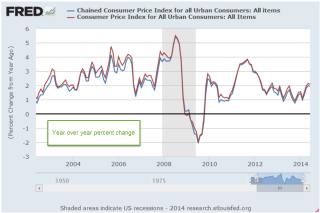 At various times in budget negotiations with the Republican controlled House over the past two years, President Obama has said that he was open to a discussion on transitioning from the CPI as it is currently calculated to the chained CPI.  Social Security payments are one of the many benefits indexed to the CPI.  The current political climate and the upcoming mid-term elections undermine the chances of any adult conversation on the topic.   Republicans are likely to retain the House and want to take the Senate.  A discussion of the CPI invites accusations from Democrats that Republicans – yes, The Cold Heartless Ones – are going to throw seniors under the bus if Social Security payments are decreased by even $5 a month because of a change in the calculation of the CPI.

The reason younger people don’t vote much may be that they hear the rhetoric of most political campaigns and realize that the discussions are much like those they heard in middle school.

Let’s crank up the wayback machine and travel to those heady days of 1999 when the stock market was booming.  Current profits did not matter.  New metrics were invented. Customers were revenue streams whose future value could be used to justify the present value of customer acquisition costs. Investments were made to position a company as the dominant player in the sector space of the internet frontier.  These metrics have some validity but the stumbling block was the simple fact that current profits do matter.

About that time some finance professors made the case in a Wall St. Journal editorial (sorry, no link.  WSJ doesn’t go back that far) that most households were overweighted in bonds. How so? A house is like a bond, they argued, relatively stable in price and pays the owner the equivalent of 6% – 7% annually.  House prices do average about 15 – 16 times annual rents according to the real estate analytics firm Jacob Reis.  At the height of the housing boom in the mid-2000s, houses were selling for 25x annual rents.

Secondly, it did not matter whether the house was paid for or not.  To illustrate this rather dubious viewpoint, let’s consider a renter who pays $12,000 annually in rent for an apartment.  She has a $500,000 portfolio, $300,000 of it in stocks, $200,000 in bonds, a 60/40 allocation split.  The bonds generate a 6% annual return of $12,000 which she uses to pay her rent.  A responsible financial advisor would not say “Oh, those bonds don’t count to your allocation mix because the income they earn is used for rent.”

Now, let’s look at a homeowner with the same $500,000 portfolio and the same allocation, 60% stocks, 40% bonds.  She owns a home valued at $200,000 which, if she rented it out, would net her $12,000 annually.  Her PITI  (mortgage payment and taxes) and maintenance repairs is also $12,000 annually.  Like the renter, the homeowner uses the $12,000 in income from her bonds to pay the house costs.  Unlike the renter, she is building some equity in the house by paying down principal.  On average, the value of her house is gaining about 3 – 4% per year based on historical patterns.  In short, the house is generating an unrealized gain that is ignored in conventional allocation models.

So, how would one compute the asset value of the house?  By imputing it from the income and unrealized gains that the house generated.  So, if a homeowner paid $3000 annually toward principal reduction and the house appreciated 3%, or $6000, the house generates a value to the homeowner of $9,000.  Using the historical 6% average return on a house, this would make the asset value of the house $150,000.  Adding that to the stock and bond portfolio gives a new total of $650,000, $350,000 of which is in bonds and the house, a bond-like asset.  Using this method, the allocation mix is 46% stocks, 54% bonds, perhaps more conservative than the homeowner desired.

After reappraising their portfolio in this manner, the professors suggested that homeowners might sell some bonds and buy more stocks to get the desired allocation mix.  To achieve a true 40% bond mix in this example, the target total would be $260,000 in the house and bonds.  Subtracting the $150,000 house value, the homeowner would want to have $110,000 in bonds.  To achieve this, the homeowner would sell $90,000 in bonds and invest in the stock market.  The investor would then have $390,000 stocks and $110,000, slightly above a 75/25 stock/bond allocation mix.  Older readers may shudder at this mix, thinking that it is quite risky.

So, let’s come back to the present day, after the housing bubble.  The calculations are not based on the actual price of the house but 1) on the income that it would generate if it were rented out and, 2) the principal pay down.  The finance professors did not factor in homeowners who were “under water,” i.e. owing more on the house than its current market value, because the debt on a house or any asset did not count in this model.

Let’s say that a homeowner bought at the height of the market in 2005, paying an inflated $300,000 for a house that would later be valued for $200,000.  The principal paydown is so small in the early years of a mortgage that it has only a small effect on the calculation.  Secondly, rent prices were under pressure during the housing boom, making the calculation of the asset value of the house lower.  In fact, a person using this method and contemplating the purchase of a house at that time might have asked themselves “Why am I paying $300,000 for an asset whose income and unrealized gain generates an asset value of $200,000 at most?”

By the end of 2013, twelve years later, she still had not made up for those initial losses.

By including a housing value in the allocation calculations, our investor had an approximately 75/25 mix of stocks and bonds.  During those 14 years, a 75/25 stock/bond mix had about the same total return as a 60/40 stock/bond mix.  There is one clear advantage to the 60/40 mix, however: the risk adjusted return is much better.  The average annual return as a percentage of the maximum drawdown, or the CAR/MDD ratio,  was much higher and the higher the better.

While the rationale for including a house in one’s bond portfolio mix might seem to be a good one, there was a timing disadvantage over this 14 year period.  Long term investors should remember that the past 15 years have been a rather unique combination of two severe downturns in the stock market and a housing bubble.  Such a combination is sure to test even the soundest theory.

New home sales are down while existing home sales continue their moderate growth trend.  Jobless Claims are at a post-recession low.  Fixes to the Disability trust fund and any transition to a chained CPI are off the discussion table till 2015, at least.  An allocation model that includes a home’s value in an investor’s bond portfolio may have merit over a long time horizon.

Next week come four reports that are sure to fire up the market if any of them surprises to either the upside or downside:  GDP growth for the 2nd quarter, Employment gains, Motor Vehicle Sales, and the Purchasing Manager’s Index for the manufacturing sector.