The Bureau of Labor Statistics (BLS) reported net job gains of 142K in August, much lower than the 200K+ expected.  The private payroll processor ADP reported 204K net private job gains earlier this week.  Some economists predicted that the number will be revised upwards in the next month.  Some point to the difficulties of the seasonal adjustment factor in August.  Below is the monthly net change in jobs with and without seasonal adjustments. 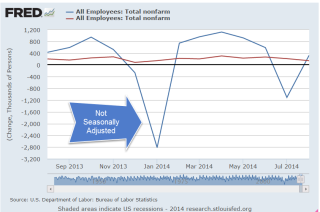 As usual, I average the private net job gains reported by BLS and the payroll processor ADP to come up with net job gains of 169K, add in the 8K job gains in the government sector to get a total of 177K. Another approach to take out the variability is to use the year-over-year change or percent change in employment.  As you can see in the chart below, the monthly seasonal adjustment (in red, overlayed on the blue non-seasonally adjusted figures) attempt to replicate this year over year change on a monthly basis.

As the year-over-year job gains topped the 2 million mark at the start of 2012, the “Golden Cross” – when the 50 day average of the SP500 crosses above the 200 day average – occurred shortly thereafter.  Zooming in on the past year, we can see that the difference between the two series is relatively slight.  In fact, the economy is nearing the levels of late 2005 to 2006 when the labor market was a bit overheated in some regions of the U.S.  The difference between now and then is that workers have relatively weak pricing power.  The average wage has increased just 2.1% in the past year. 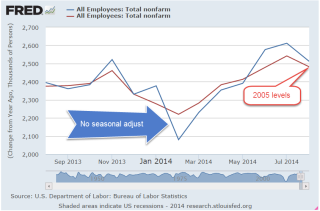 A comparison of the monthly growth in jobs, as reported by the BLS, to the Employment index of the ISM Non-Manufacturing Survey shows that the ISM number charts a less erratic path through the variability of the employment data.  The index has been positive and rising since the hard winter dip. 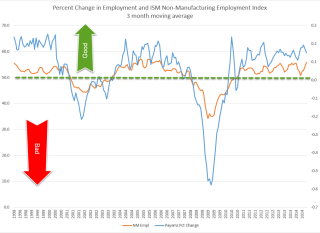 The unemployment rate ticked down slightly in August, but the more significant trend is the decreasing number of involuntary part timers, those who are working part time because they can’t find full time work.

The widest measure of unemployment, which includes both these part time workers and those who have become discouraged and stopped looking for work, finally touched the 12% mark this month. 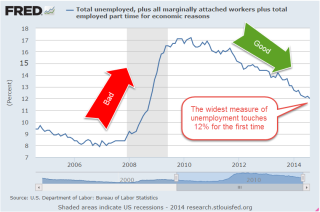 In short, this month’s employment report was good enough but not so good that it would shorten the period before the Federal Reserve begins to hike interest rates.

Each month for the past year, I have been doing a little spreadsheet magic on the Purchasing Managers Index published by ISM to weight the employment and new orders components of this index more heavily.  This has proven to be a reliable and less erratic guide to the economic health of the country.

The manufacturing component of the ISM Purchasing Managers Index was particularly strong in August.  Because the CWPI weights new orders and employment heavily in its composition, the manufacturing component of the CWPI is at levels rarely seen in the past 34 years.  Levels greater than this have occurred only twice before – in November and December 1983 and December 2003.  Both of these previous periods marked the end of a multi-year malaise.

The services sector, which comprises most of the economic activity in the country, is strong and rising as well. New orders declined slightly but are still robust and employment is growing.  The composite of these two components is near robust levels. 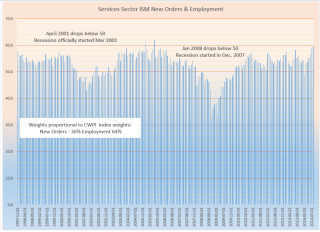 This month the CWPI composite of manufacturing and service industries topped the previous high of 66.7 set in December 2003 and is now at an all time high in the 17 years that ISM has been publishing the non-manufacturing index. If the pattern of the past few years continues, this overall composite will probably decline in the next month or two.