On the week before Christmas, the stock market fell more than 7%. I wrote about the historical trends following previous falls of that magnitude. The week opened on Dec. 17th with the SP500 index. Two months was the shortest recovery period after 7% falls in 1986 and 1989. In a previous budget showdown in 2011, the market recovered after five months, but shutdowns are just one component of a complex economic environment. If the outlook for corporate profits looks positive, the market will pause during a long showdown, as it did in October 2013.

Investors wanting to contribute to their retirement plans can do so in a measured manner. The uncertainties that produce tumultuous markets take some time to resolve. Although the market rose for five straight days in a row this week, it was not able to reach that opening level of 2600 three weeks ago.

Let’s turn to a persistent problem: the lack of income growth. Beginning in the early 1970s, the annual growth rate in real personal income began to decline (Note #1). I calculated ten-year averages of annual growth to get the chart below. 5% annual inflation-adjusted growth during the 1960s became 3% growth during the 1980s and early 1990s. The dot-com and housing booms of the late 1990s and early 2000s kicked growth higher to 3.5%. In 2008, annual growth (not averaged over ten years) went negative and reached as low as -4.9% in May 2009. Following the Financial Crisis, the ten year average is stuck at 2% growth.

The Bureau of Labor Statistics (BLS) tracks total employee compensation costs, including benefits and government mandated taxes (Note #2). I compared ten-year averages of both series, income with (blue line) and without (orange line) benefits. The trend over five decades is down, as before. When the labor market is tight, employers have to offer better benefit packages and the growth in total compensation is higher than income without benefits. When there is slack in the market, employees will accept what they can get, and the growth of total compensation is less. 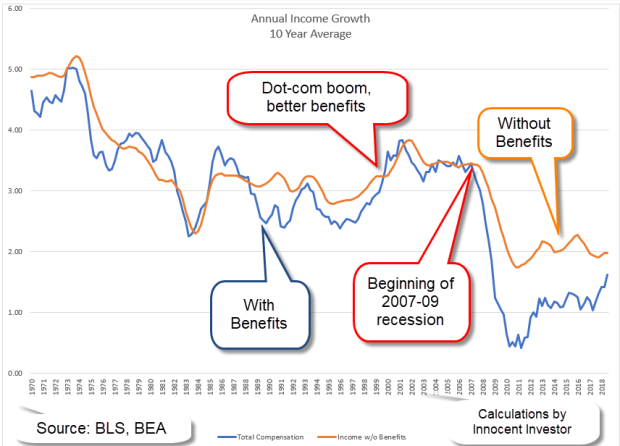 Beginning in early 2008, we see the dramatic effect of the last recession and the financial crisis. Income growth went negative, but income with benefits plunged 19% by January 2009. With unemployment stubbornly high, employers could attract employees with rather skimpy benefit packages. The ten-year average growth of income with benefits (blue line) sank to 1%, a full percent below income without benefits. In the last two years, the two series are starting to converge but the trend is below 2% growth.

The data contradicts those who claim that income growth is low because employers are spending more in benefits.