There is a lot of discussion about the renewal of the Bush tax cuts enacted in 2003.  This past week the Senate passed a bill to renew the tax rates for all those with less than $250K taxable (not gross) income – $200K if filing single.  The measure is unlikely to pass the Republican dominated House which wants the cuts extended for all taxpayers, including the wealthiest.

For many of us, the tax rate cuts started in 1987, not 2003, after the Tax Reform Act of 1986.  Below is a 100 year chart of historical tax rates for a married couple with two children with a gross income of $66,000 in inflation adjusted dollars (thanks to the Tax Foundation)  After the standard deduction and exemption allowances, this is approximately $40,000 in taxable income.  This is middle class income, slightly below the median for married couples. 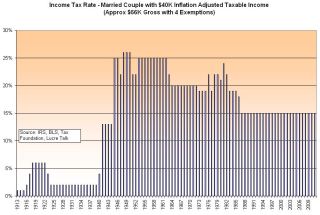 As you can see, we have enjoyed comparatively low income tax rates for the past twenty-five years.  For the past ten years, we have been conducting two wars without paying for them.  The rich are not paying.  The middle are not paying.  When our parents and grandparents ran up huge debts fighting WW2 and recovering from the 1930s Depression, they increased taxes on the middle class and the rich to pay down the debt.  This generation, the children and grandchildren of that WW2 generation, decided they had a better idea – charge it!  After all, we have expenses that previous generations didn’t have – like our cable TV bill and internet bill and cell phone bill.  The WW2 generation also had bills that previous generations didn’t have – car, electrical and phone bills for services and products that their parents and grandparents didn’t have.  Did they use that as an excuse to reduce their taxes?  No.