Gross Private Domestic Investment (GPDI) consists of capital spending on factories and equipment, improvements in rental properties, and changes in inventory.  Changes in GPDI reflect expectations by the business community.  Companies and landlords continue to increase investment after the precipitous fall of 2008.  Below is the long term view.

Let’s zoom in on the past five years to show some comparisons.  In 2010 there was a slight decline in investment.  In 2011 and 2012 came short periods of a levelling off of investment.  So far this year, the trend is upward.

Declines in investment accompany recessions but do not consistently precede recessions.  However, declines in the year over year (y-o-y) percent change do signal an aggregate caution among businesses.  The attentive investor would do well to notice these signals.  Investment growth remains positive. 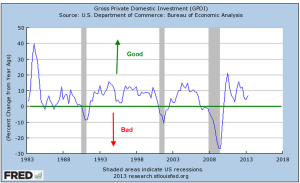 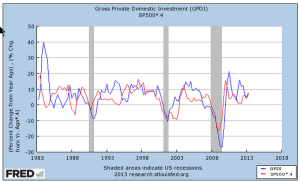 The y-o-y gain in investment has been positive since the latter part of 2009, indicating that business owners and managers have enough confidence in future business to increase their investment. A key component of the business landscape is the willingness of consumers to buy.  This past Tuesday came the monthly report on Retail Sales showing a .2% monthly gain for total retail sales, including food services.  At an annualized growth rate of 2.4%, sales  are positive but annualized gains of 3% or more would indicate strong consumer demand.  So far this year, earlier forecasts of negative real retail sales growth in response to sequestration policies have proved unfounded.  Below I’ve excluded the food services component which accounts for approximately 10% of retail sales.

When we look at retail sales as a percent of GDP, the total economic activity of the country, retail sales excluding food is still below 20 year averages.

Adjusting for inflation and population, we can see that it is food services that continues to show strong growth over a two decade period.  While the recession put a dent in that growth, it is more than 25% higher than it was two decades ago. 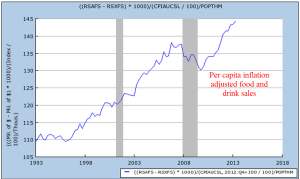 Each month the U. Of Michigan releases a consumer sentiment survey.  This past Friday’s report showed a surprising fall in sentiment from 85 to 80. 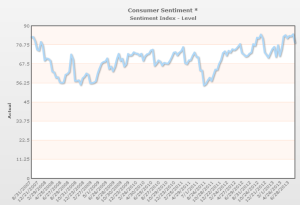 In the U.S. we can take a rough reading of the willingness of consumers to spend by looking at savings patterns – we don’t save as much.

We are down below a 5% savings rate again, indicating that people are confident enough to spend most of their income.  That is one reading.  Another is that many households have responded to the increase in the Social Security tax this year by reducing their savings.  The lack of savings by Americans has a long history.  Before the Social Security Act was passed in the 1930s, George Washington Carver wrote: “We have become ninety-nine percent money mad. The method of living at home modestly and within our income, laying a little by systematically for the proverbial rainy day which is due to come, can almost be listed among the lost arts. ”  Perhaps that is why some felt that Americans had to be put on a mandatory retirement program called Social Security.

The upward spike in savings at the end of 2012 has been attributed to higher dividend payouts and bonuses in anticipation of the “Fiscal Cliff” in 2013.  Per capita Disposable Personal Income continues its subdued but steady march upward, also rising dramatically in the last part of 2012 as a one time anomaly before the onset of higher taxes and sequestration.

On an inflation-adjusted basis, we are 10% higher than we were ten years ago.

But a longer term picture is a bit more sobering.  The decades longs rising trend of real income has clearly plateaued since the recession began at the end of 2007, over five years ago. 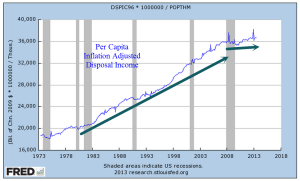 The recession has been a sobering experience for everyone, including the business community. While the growth signs are mildly positive, an underlying watchfulness seems to be the order of the day.