You’re on a date with me, the pickin’s have been lush
And yet before this evenin’ is over you might give me the brush

Luck Be a Lady from the play Guys and Dolls

In opening remarks Tuesday at a Federal Reserve conference in Atlanta, Janet Yellen, head of the Fed, made the case that ongoing weakness in the global economy warranted support from central banks and that she did not anticipate full employment in the U.S. for another two years.  The Fed reported that the economies in all 12 Fed districts improved in March as consumers ventured out of their winter burrows. The stock market rose in each of the four trading days this week, but has still not risen to the level it opened at on Friday, April 11th, when the market dropped 2%.  Disappointing earnings reports restrained enthusiasm sparked by the prospect of continued easy monetary policy from the Fed.

On Tuesday, discount broker Charles Schwab reported a 58% increase in first quarter profits.  Trading volume was the highest in its history as many individual investors returned to the stock market.

In the tech sector, Intel and IBM reported declining revenues of 1% and 4% respectively.  The stock price of both companies is about the same as it was two years ago.  Intel is trying to transition from its traditional dominance in PC chips as sales of PCs continue to slow.  IBM is undergoing a similar transition from hardware – particularly mainframes – to business software.

Since early 2012, the Technology SPDR ETF,  a broad basket of tech stocks, is up almost 50%.  For an investor who does not have the time to research trends in a particular sector, particularly one as dynamic as the technology sector, buying a representative basket of the sector may be the safer choice.

American Express reported a first quarter drop in revenue of 4%, attributing most of the decline to small business and corporate spending.

Google reported an 8% drop in first quarter revenue from the fourth quarter.  Year over year, revenue rose 10% but investors have realized that the days of 20 – 40% annual revenue gains are probably over.  Since early March, the company’s stock has dropped 12%.

W.W. Grainger sells supplies, parts, equipment and tools to businesses.  Since 2009 revenues have risen almost 50% but sales growth has been meager since the middle of last year.  A few weeks ago, I noted the lack of growth in maintenance and repair employment.  Grainger’s lack of revenue growth and declining spending by businesses at American Express are disturbing indicators that there is a lack of confidence and investment in growth.

The industrial and financial megalith General Electric reported a year over year revenue increase of 2.2% but the company’s revenues have been fairly flat for four years and the stock price is almost 20% below its mid 2007 level.  GE is gradually shedding its financial businesses in order to focus on what it does best – making stuff, big stuff and small stuff.  With a dividend yield of 3.4%, this stock may be worth a more in depth look for investors who buy individual stocks and think that the company can make the transition.  As a side note:  in 2013, GE managed to defer $3.3 billion, or 85%, of its income tax liability, which will no doubt get some attention in the coming election cycle.  What won’t be mentioned is that GE paid over $8 billion in 2011 and 2012.

Retail sales were up a strong 1.1% in March, the most in two years.  Auto sales were particularly strong. Household debt is at the same level as it was in the 1st quarter of 2007 but has been slowly rising in the past year.  The years from the mid 1980s to the mid 2000s is often called the Great Moderation by many economists but the period is marked by an immoderate 8.6% annual growth rate in household debt.  Since the onset of the financial crisis and recession, households have jumped off that runaway train yet today’s levels still reflect a 34 year annualized growth rate of 7%.

With meager growth in personal income, it is unlikely that consumers can afford to rise to those heady and unsustainable growth rates in debt.  However, the percent of income needed to service that debt is at 34 year lows.  Growing consumer confidence and willingness to take on more debt may pull the economy out of the current lackluster growth.

A link on this blog is to the excellent work that Doug Short does.  In case you missed it, here are some graphs he presented on margin debt reported by the NY Stock Exchange, or the amount of money that investors have borrowed against their stock holdings.

I am not sure how reliable this indicator is.  Selling as margin debt starts to drop and buying as it starts rising again has mixed results.  The strategy would have kept a hypothetical investor out of the market during the market downturn in the early 2000s, back into the market in late 2003, out of the market in early 2008, and back into the market in July 2009.  So far, the timing looks great.  Since then, however, the rise and fall in margin debt has signaled some fake outs, so that an investor would have sold during a temporary market disruption, only to buy in later at a higher level. 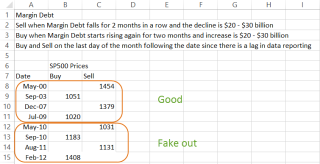