Last Sunday, George and Mabel flew back to Denver from Portland.  They took a bus shuttle from the terminal to long-term parking and discovered that neither of them could find the parking stub which indicated which section they had parked in.  Mabel dutifully looked through her purse.  “I know you kept the stub, George, but I’ll look anyway.”  Mabel remembered details like this so George knew she was probably right. “I should have put it in my wallet and it’s not there,” George replied.  They asked to be let out at the main exit booth.  The attendant told them to go inside the office where they met a nice man with a patient look.  His English was barely accented with the round vowels of Spanish.  “My name is George.  How can I help you?” the attendant announced.  “Hey, that’s my name too,” George replied, as though each of them belonged to a brotherhood.  “Well, we seem to have lost our ticket stub and we can’t remember where we parked our car,” George told him.  “What day did you come in?” the other George asked.  “Last Monday, about 7:30 in the morning.”  The attendant’s face adopted an odd stillness, his eyes looking far away. “That was a busy morning.  We were parking in GG and HH at the far end of the lot.”  Both George and Mabel were amazed at the man’s memory and said so.  The attendant smiled graciously.  He pulled a set of keys from a hook on a key board, picked up two of their bags and led them to an idle shuttle parked near the office.  At the far end of the lot, the attendant drove slowly down one row until they reached the edge of the lot, then drove down the next row.  Mabel was the first to see their car. “There it is!” she exclaimed.  George gave the attendant a $10 bill, thanking him for his help.  The attendant nodded graciously, then drove back toward the office.  “There’s someone with  a remarkable talent working at a parking lot,” Mabel remarked.  “I think our schools do a terrible job of helping students discover their own talents.   The structure of our society, our economy – it could uncover and use these talents better.”

Sitting at his desk Sunday night, George mulled over the same thought that had distracted him on the flight from Portland.  Should he sell some or all of their stock holdings?  Two indicators said yes, another said maybe, one said this was temporary.  While on vacation, he had not compiled his makeshift index based on the monthly Purchasing Managers Index.  ISM, the publishers of the index, had released the services sector figures that past Friday.  He pulled up the latest report, then input the figures into his spreadsheet.  The index seemed to have peaked in September at a very robust reading near 70, rising up a few points from an already robust reading in August.

This composite of economic activity was a “stay out of trouble” indicator, giving buy and sell signals when the index rose above and below 50.  The last signal had been a buy signal in August 2009 when the SP500 was about half its current value.  Before that, the previous cue had been a sell signal in January 2008, a month after the official start of the recession.  Because employment and new orders were the largest components of the index, a chart of just these two components of the services sector reflected the larger composite. 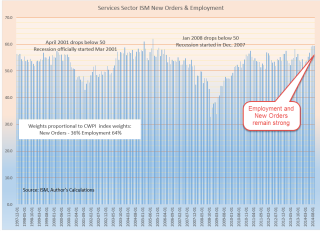 So, the American economy was strong and Friday’s employment report had been a positive surprise. What seemed to be worrying investors was weakness over in Europe.  But Europe had been nearing recession for a few quarters now and that had not worried investors during the past year and a half.  Yes, no, yes, no decisions swirled around in George’s head.  Should he wait till the market opened Monday morning and see what the mood was?  Well, what if it was rather flat?  What would that tell him?  As Yogi Berra said, when you come to a fork in the road, take it.  So George did.  He put in an order to sell half of their stock holdings, essentially taking both forks of the road.

On Monday the market opened up above Friday’s close, indicating that a number of investors had put their buy orders in over the weekend after the positive employment report.  Active traders took the market back down below the level of Friday’s close.  In 1970s lingo, it was “negative vibes,” or negative sentiment in normal speak.

The Federal Reserve announced that they would begin publishing a labor market index that compiled 19 different labor market indicators to give an overall report card on employment.  The index was first proposed in a working paper published in May and the Fed was cautioning that the index was not “official.”

A chart of the various components of the index showed the correlations of each component with overall economic activity in the country.

The Fed provided a permanent link to a spreadsheet that they would update each month.  It was  a zero-based index.  Readings above zero meant overall conditions were improving; below zero, conditions were deteriorating.

The market opened up Tuesday with the news that Germany’s industrial output had dropped 4% in August.  A key leader and consistent performer, Germany was the Derek Jeter of the Eurozone.  As every baseball fan knows, if Derek was not producing, the whole team was in trouble.  The whole team in this analogy was the world.  The IMF revised their global growth rate for 2014 from 3.4% to 3.3%.  Quelle horreur!  Never mind that Tuesday’s JOLTS report showed the most job openings since 2001 when China was admitted to the World Trade Organization and started sucking jobs from the U.S.

Tuesday evening, George and Mabel watched the full moon, the Hunter’s moon, when it was about 30 degrees above the eastern horizon.  Clouds had obscured the moon when it was first rising and really big.  Wisps of clouds still drifted across the pale disk.  “It’s a Zorro moon,” George remarked.  “Zorro would go out on a night like this and undo the oppressive plans of the evil comandante.”  Mabel laughed.  “We’ll rename it the Zorro moon, then.  All those calendars we get each year will have to be changed.”  “Yeh, what’s with that?” George asked.  “No one ever sends a pamphlet of favorite quotes or prominent dates in history.  Just calendars.”

Mabel set her alarm to get up at 4:15 AM so she could watch the lunar eclipse.  She woke up about 7:30 that morning, disappointed that her sleeping self had turned off the alarm without even bothering to notify her lunar eclipse watching self.

On Wednesday afternoon, the Federal Reserve released the minutes of the September meeting of the Open Market Committee, the group within the Fed that that determined interest rate policy.  The sentiment of the Committee was rather dovish, and the stock market rallied up sharply in the last two hours of trading.  Still, the close was not as high as the opening price on Monday, two days earlier.  Volume was the highest it had been since August 1st and should have been confirmation that sentiment had reversed to the positive.  George was still cautious.

The market is essentially an argument over value.  The difference between each day’s high and low price indicates how much investors are arguing. The 5-day average of that difference was now double the 200 day average and rising.  George had learned that bigger arguments usually led to lower prices.  He had enjoyed a nice run up in 20-year Treasuries during the summer but then got out in mid-September.  Now two thirds of his investing stash was sitting on the sidelines in cash.  Treasuries had rallied, proving that it was difficult, if not impossible, to time the market.  Something George didn’t like was the relatively small movement in the price of Treasuries as the stock market rallied.

On Thursday, the market dropped quickly on news that German exports had dropped almost 6% in August. By the end of the day, the SP500 index had lost about 2%.  Bears saw an opportunity to hawk their books warning of the coming collapse of the global economy.  “Is the end near?  Next we go to Doug Munchie of Funchee Crunchie Capital.  Doug, tell our audience some companies that you think will do well as the coming global meltdown approaches.” Doug is looking sharp in a $300 white shirt and a $200 blue and red tie. “Good morning, Megan.  For our cautious clients, we recommend gold Lego blocks.  Our clients can construct many creative projects with their gold while they sit out the collapse.” “Thanks, Doug.  When we come back, we’ll talk to a priest who claims that holy water can cure Ebola.”

By the time he died, George thought, he will have heard at least 1 million hustles.  “Doctor, do you know the cause of Mr. Liscomb’s death?”  “Yes, he suffered from Bullshitis, the accumulation of a lifetime of blather.  A person’s brain becomes clogged and shuts down.”

The decline continued on Friday, bringing the SP500 back to the price levels of late May.  The closing price touched the 200-day average.  For long term investors, the next week might be a good  opportunity to move some idle cash into stocks. If the downturn became a serious decline, the 50 day average would cross below the 200-day average in a few weeks or so.  That crossing was called the Death Cross, a serious shift in sentiment.

Watching the news later that evening, Mabel asked, “We’re fine?”  “We’re fine,” George replied. Then he changed the subject to their recent visit to Oregon.  “I wish could be close to the ocean and yet not have all the dampness.”  “It’s called southern California,” Mabel quipped.