The big news this week was the decision by the Fed to not raise interest rates this month.  Big mistake.  The Fed’s decision signaled a lack of confidence in the global economy.  Are we to believe that the continuing strength of the American economy is so weak that it can not weather even a 1/4% interest rate increase?

Message received.  When the news was announced on Thursday, the initial reaction was good.  Yaay!  no rate increase.  Then, the reality sunk in.  Does the Fed know something that the rest of us don’t? The buyers went to the back of the bus.  The sellers started driving the bus.  Pessimism wiped out the gains in the early part of the week and ended the week down 7/10%.  When in doubt, traders get out.

There are many aspects of the labor market.  The Fed crafts a composite of over 20 factors, called the Labor Market Conditions Index (LMCI).  The latest reading was released on September 9th, a week before this month’s Fed meeting.  This may have contributed to the caution in the Fed’s decision making.  The overall labor market has still not fully recovered from the downturn this past spring. 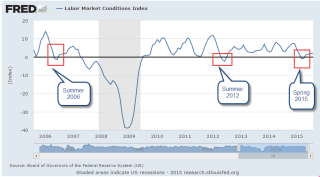 Will your job become automated?  In this fast morphing economy, the demand for a particular skill set can change quickly.  Younger people, whether working or still in school, need to focus on developing transferable skills.   Here’s a list of the nine criteria that some researchers determined were important to keeping a job from being automated: “social perceptiveness, negotiation, persuasion, assisting and caring for others, originality, fine arts, finger dexterity, manual dexterity and the need to work in a cramped work space.”

When the first Boomers were born at the end of World War II, 16% of the workforce was employed in agriculture.  Millions of agricultural jobs have been lost in the past 70 years. Now it is less than 2%. (USDA source)

Computerization has led to the loss of millions of clerical and accounting jobs in the back offices of businesses throughout this country. Despite those job losses of the past 25 years, there are almost twice as many professional and business employees now as there were in 1990 (Source )

Despite all these job losses due to automation and more efficient production methods, there are 350% more people working now (140 million) than there were at the end of WW2 (40 million). (Source)

Those who get left behind are those who have a narrow set of skills.

Each August the Federal Reserve hosts an economic summit for central bankers, economists and academics.  In 2014, Fed chair woman Janet Yellen commented on several aspects of the labor market:

“Labor force participation peaked in early 2000, so its decline began well before the Great Recession. A portion of that decline clearly relates to the aging of the baby boom generation. But the pace of decline accelerated with the recession. As an accounting matter, the drop in the participation rate since 2008 can be attributed to increases in four factors: retirement, disability, school enrollment, and other reasons, including worker discouragement.“

As Yellen noted, some changes were structural, some cyclical:
“Over the past several years, wage inflation, as measured by several different indexes, has averaged about 2 percent, and there has been little evidence of any broad-based acceleration in either wages or compensation. Indeed, in real terms, wages have been about flat, growing less than labor productivity.“

Since unemployment peaked at 25% during the Great Depression in the 1930s there has been an ongoing debate about unemployment during recessions.  Why don’t employees simply offer to work for less when the economy starts slowing down? Yellen offered some insights [my comments in brackets below]:

” the sluggish pace of nominal [current dollars] and real [inflation-adjusted] wage growth in recent years may reflect the phenomenon of ‘pent-up wage deflation.’ The evidence suggests that many firms faced significant constraints in lowering compensation during the recession and the earlier part of the recovery because of ‘downward nominal wage rigidity’–namely, an inability or unwillingness on the part of firms to cut nominal wages. To the extent that firms faced limits in reducing real and nominal wages when the labor market was exceptionally weak, they may find that now they do not need to raise wages to attract qualified workers. As a result, wages might rise relatively slowly as the labor market strengthens. If pent-up wage deflation is holding down wage growth, the current very moderate wage growth could be a misleading signal of the degree of remaining slack. Further, wages could begin to rise at a noticeably more rapid pace once pent-up wage deflation has been absorbed.”