Remember the clip of Jack Nicholson In the 1980 movie The Shining? Jack hacks his way through a door with an axe, then presses his face to the jagged hole and announces, “It’s Johnny!” Substitute “Trade Wars” and we get a dramatic portrayal of the stock market this past week. On several days, the Dow swung 700+ points, or more than 2%, in response to fears of a tariff feud between the U.S. and China.

The share of global commodities that China consumes far exceeds its share of the world’s population (1/5) or the global economy (1/6). Here’s a chart from Visual Capitalist.

On Thursday, the market opened almost 2% down in response to comments from the chief Tweety Bird in the White House. Later that morning, Larry Kudlow, Trump’s new NEC Director, did a quite effective job of easing market jitters. Kudlow has been a host of CNBC and his own radio program for many years and is savvy to shifting sentiments. No, he said, Trump is a free trader in disguise. This is just a bargaining tactic. The market started the day 500 points down and finished up 240 points.

This is a trader’s market. Much of the price action is taking place in the last hour of the trading day. Each price recovery since mid-March has failed, so the overall sentiment is negative and Friday’s trading was near the 200-day average. For an investor who has not yet made their 2017 IRA contribution, buying now is somewhat equivalent to dollar cost averaging over the past nine months. For those with shorter time horizons, cash looks good till the market finds its head.

The Labor Report for March showed job gains of just 103,000. This was below the 175,000 anticipated gains and far below ADP’s 240,000 estimate of job gains. Mid-March weather on the east coast may have had a negative effect on this month’s survey. The average of the BLS and ADP surveys is 172K, and I find that average to be a more accurate long-term estimate.

The BLS recently released a report on unemployment rates and weekly earnings classified by degree. This chart is a dramatic picture of the advantages of higher education. 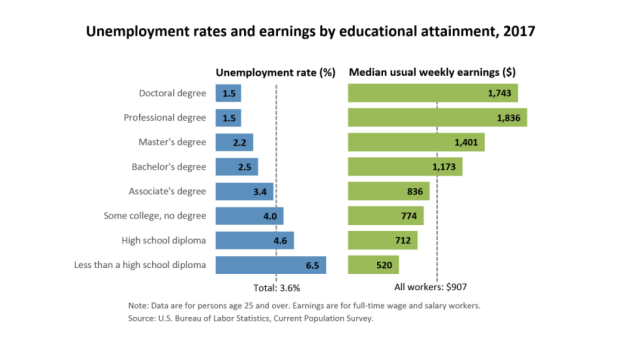 VividMaps released a map showing the income needed to buy an average home in each state. Because the data uses average house prices, the map overstates the affordability problem for many families but does reveal the underlying trend. Why do I say overstates? The average home price is far above the median price because extremely expensive homes raise the average.

First quarter earnings to be released in the next two weeks are expected to show strong annual growth. Will the confirmation of rosy expectations overcome the darker fears of a global trade war? Stay tuned.