Total debt levels are high relative to income, but the payments on that debt, the Debt to Income ratio, are at historic lows. Why? The absurdly low interest rates of the past decade play a significant role. What could happen as interest rates rise?

An explanation of terms first. The Debt to Income ratio (CFPB  page) measures the monthly flow of debt service payments to the flow of monthly income. Lenders use this ratio to judge the capacity of a borrower to repay a loan. Let’s call this ratio DTI.

The aggregate household debt to income ratio measures the pool of total debt to the flow of yearly income. Lenders and economists use this measure to assess the leverage of income, i.e. how much debt can the average income buy? Let’s call this ADTI.

As the DTI rose to historic highs before the recession, the average household was paying more than 13% of their disposable income to service their debt.  7.2% of that was mortgage payments. After the recession, the DTI has fallen to historic lows just above 10%. 4.4% of that was mortgage payments, which are near historic lows. Rock bottom interest rates have been the chief factor in that reduction. The percentage of disposable income going to non-mortgage debt payments have remained stable at 6%.

The ADTI shows the leverage of income to debt. Before the recession, each household had debt to income ratio of 1.2:1 (1.2 to 1), as shown in the chart below. (Federal Reserve paper).  The aggregate debt to income ratio is now 1:1. During and following the recession, some households reduced their debt voluntarily; some had their debt reduced involuntarily through home foreclosure and credit card debt write-offs. Although the current ADTI level is just about 1:1, this is far above the debt levels of the 1980s and 1990s when the ratio fell as low as .6:1. Households have transitioned from overleveraged before the recession to fully leveraged after the recession. 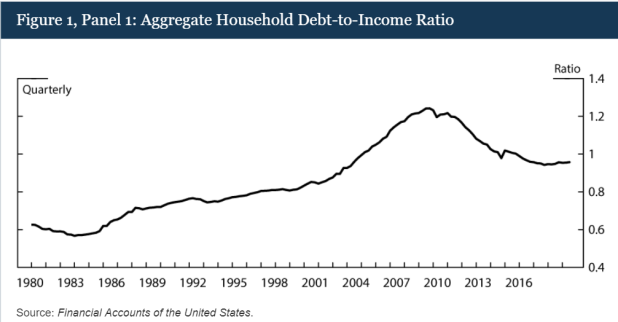 Households with higher incomes are more leveraged and raise the aggregate ratio of debt to income. Those with lower incomes have less credit available to them and less debt. They lower the aggregate ratio. Lower income households may not qualify for a mortgage, the greatest source of most household debt and a point of high leverage. The current mortgage leverage is more than 3-1; a $77K income is needed for a $260K mortgage at 4.5% for thirty years (calculator).

To reach the average 1:1 ratio of debt to income using the example above, there must be $183K of income with no debt. For one $77K household to get overleveraged to get that mortgage, there must be fifteen households with $50K incomes who are underleveraged (.25:1 debt to income). Where are those people? Many of them are in rural areas, particularly in the vertical middle of the country and several mountain states. See the 2006 county map of aggregate debt to income in the Federal Reserve paper linked above.

“It’s the economy, stupid!” read the banner that James Carville posted in Bill Clinton’s campaign office during the 1992 election race. In a series of articles published in 2004, journalist Bill Bishop coined the term “the big sort” and published a book by that name in 2009. This is one more example of the sorting that is taking place in this country.

Many people in rural areas live a penny-wise life because they don’t like to be in debt. Some are living frugally because credit is not available to them. In either case, their low levels of debt relative to income are enabling those in urban and suburban areas to maximize their debt leverage. Those living in urban areas may complain – quite rightly – that they must borrow more than they would like because the cost of living in some cities is so high. Regardless, people in one set of circumstances and making do with less are effectively enabling the income to debt leverage of another set of people who are enjoying more. That dissonance adds to the cacophony of the current debate in this country.