“Promote justice for all people.”
What Lincoln and the Reconstruction Republicans began in the 19th Century, President Lyndon Johnson (LBJ) hoped to fulfill in the 20th Century. President and Mrs. Johnson started the LBJ foundation in 1971, three years after he left office. In an ongoing commitment to the goal of justice for all, the foundation honors individuals who have demonstrated a dedicated pursuit of those values. Last year’s recipient of the foundation’s Liberty and Justice For All award was former Arizona Senator John McCain. (Note #2).

During his life growing up in Texas, LBJ witnessed the class/race warfare that many white Southerners took for granted. The un-Christian racism apparent for all to see in the southern states was almost as prevalent in northern states but cleverly disguised by implicit understandings among white Northerners. Urban housing maps were “redlined” to confine blacks to small sections of a city where they could purchase or rent housing. During his presidency, LBJ signed the Fair Housing Act to outlaw, if not stop, the practice (Note #3). Many Northerners who had adopted the moral high ground in their criticism of white Southerners continued to flee toward the suburbs (Note #4).

LBJ had to overcome opposition in his own Democratic Party to pass the Civil Rights Act of 1964 (Note #5). The Act struck down employment, credit and some housing discrimination prevalent throughout the country at the time. This point in the resolution is a reaffirmation of last century’s aspirations and legislation.

“Providing resources training and high-quality education to all people of the United States.”
This goal, first stated in the middle of the 19th century, led to the adoption of public education by all states shortly after the Civil War. By the end of World War 1 in 1918, all states had adopted compulsory education laws. During the first half of the 20th century, the country began Ed 2.0 as many states built secondary schools. When America declared war on Japan after Pearl Harbor in 1941, half of all young people had high school diplomas (Note #6).

In the last forty years, Ed 4.0 has been marked by the growth of community colleges within the states. This allowed more students affordable entry to a college education and promoted two-year degrees in applied training.

This goal in the Green New Deal marks a new phase in American Education: Ed 5.0. In the first two stages, the states were responsible for the development and funding of K-12 schools. The growing role of the Federal government in phases Ed 3.0 and 4. 0 worry those who have a well-grounded suspicion of the Federal government. In most areas, it is inefficient, slow to respond to a changing environment and dismissive of local concerns and standards.

These concerns should inform, not impede, this new phase of American education. Most states do not have the resources to build and maintain educational institutions that are global leaders. The Federal government must take the lead because the need is urgent. Mechanical Automation has replaced many blue-collar jobs but many of these jobs are still not cost effective to automate. Artificial Intelligence, or Intellectual Automation, is the greater threat and it affects low to medium skilled white-collar jobs.

Trends in Financial Sector employment illustrate the growing threat. A steady increase in employment from the end of World War 2 through the middle of the 1980s hit a ceiling as affordable computing became more available. Since that time, the percent of jobs in the financial sector has declined. 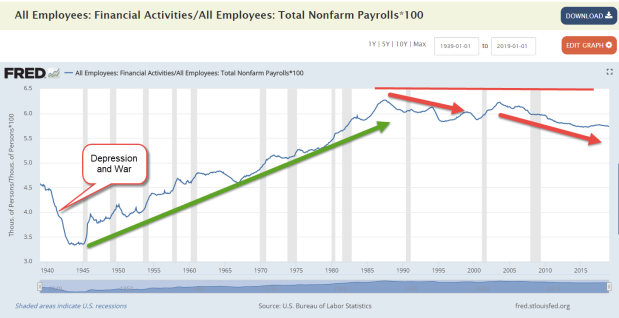 A sharp mind, attention to detail and a knack for customer service are no longer a path into this sector. Programming jobs that paid the equivalent of $70,000 twenty years ago have been replaced by jobs paying $50,000. Common programming tasks have been automated. White collar employees will compete against AI systems that can be situated in any country. To compete against other industrialized nations, the white-collar workers of tomorrow will need to develop the magical talents of the human brain that are difficult to automate. That will require a large national re-commitment to education.

The high unemployment that characterized the Great Recession and Financial Crisis of 2007-2009 made it apparent to many job seekers that they needed some post-secondary education. Millions signed up for classes in community colleges, private colleges and public universities. Many took advantage of federally insured loans. Since 2006, student loan debt has almost quadrupled to its current level of approximately $1.6 trillion (Note #9). More than 11% of loans are delinquent (Note #10). Current law prevents the discharge of student debt in bankruptcy. Payments in default can be withheld from federal benefits like Social Security.

As the nation enters Ed 5.0, there will be much discussion and dissension over student loan forgiveness. Is it right that one person should receive an advantage over another person in the job market at taxpayer expense? These involve questions of moral hazard and fairness that provoke instinctual reactions in all of us. Compromises may include a debtor paying an additional percentage in taxes on wages above a certain threshold. We must not sacrifice the pragmatic concerns of a nation competing in the global workforce on the altar of our righteousness toward the actions of others.

By re-committing to traditional American values and ideals, this resolution can engage the public in a lively debate. What are our values? How do we attain our ideals in a practical and equitable manner? Do Americans need the passage of a resolution to spark argument? Heck no. This country was founded on argument and a consensus over how we should argue. The Civil War was our one horrible failure to argue with words. Thousands died in an argument using guns and cannons, not debate. Let’s hope that was our last failure to debate.

One thought on “Green Goals”