Moo. One of the sacred cows of tax law has been the mortgage interest deduction. There is talk that the proposed Tax Reform law will erase this deduction. Who benefits from the deduction? Before I look at that, here’s some groundwork.

Two months ago the IRS released aggregated income tax data for 2015. Pew Research analyzed the data and produced this  chart of who pays how much in individual income taxes.   I took the liberty of marking up  their chart. 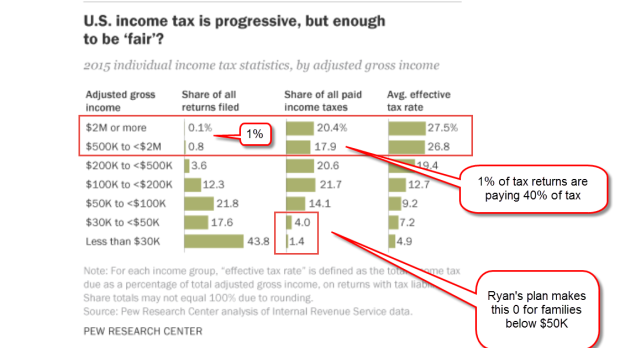 The Tax Reform bill that is being tortured to death in the back rooms of Congress proposes to double the standard deduction, making the first $50K that a couple earns tax-free. About 50% of tax returns will pay little or no federal income tax. That leaves the other half to pick up the tab for the 5% of taxes paid by the lower half of incomes. 1% of tax returns paid 40% of taxes in 2015 and they will argue that they are already paying their fair share.

As the Congress tries to craft a Tax Reform bill, one of the hot button topics is the mortgage interest deduction. According to IRS analysis of 2015 tax data, 33 million returns, about 20% of total returns, took the mortgage interest deduction totaling $304 billion, averaging over $9000, or $770 a month. The annual cost to the Treasury is about $70 billion in taxes not paid.

The bulk of this tax giveaway goes to wealthy families, but the program is popular among middle class families in expensive housing markets, particularly on the east and west coasts. The Tax Reform package proposes to double the standard deduction.  For many married couples, this would exclude another $25K of their income. This $25K is far more than the $9K average mortgage interest deduction.  However, there will be about 8 million returns, mostly wealthier Americans, who will pay more.  Those 8 million will certainly raise a campaign of alarm and outrage as they try to convince the vast majority of Americans that this reform is so un-American. Those in the real estate sector will claim that this will cripple a recovering homebuilding sector and prevent many American families from owning a home.  It won’t.  Each sector of the economy wants to preserve their tax carve outs because their business model has come to depend on it.

Notice that the analysis included effective, not marginal, tax rates. What is the difference? The effective rate is the net tax divided by adjusted gross income. It is the average tax paid for all the income received. For those who use tax preparation software, the program calculates the effective rate and prints it out on the summary page.

The marginal rate is the highest tax rate paid on the last dollar. When we hear someone complain that they are in the 33% tax bracket, for example, we think that the person pays 33% on all their income. They don’t. A two-earner family making $130K, filing jointly, two deductions, would be in the 25% bracket in 2017, but their effective tax rate is 12.89%, almost half of the marginal rate. (Dinky Town calculator)

Why is this important? Let’s return to the difference between effective and marginal tax rates. Let’s say our hypothetical couple making $130K wants to buy a new house for $300K. After $60K down, they will pay about $7800 per year in interest for the first 20 years of a 30-year mortgage (Zillow mortgage calculator). What they tell themselves is that they are “saving” over $160 per month, almost $2000 per year, because they are in the 25% tax bracket.

What is the fallacy? The couple assumes that the first dollars they earn buy the groceries, buy clothes for the kids, or make the car payment. It’s the last money earned, the money that is taxed at a 25% rate, that they will use to pay the mortgage. It’s sounds silly, but it’s effectively what we do when we use the marginal rate to analyze costs. Real estate salespeople sometimes use this technique to upsell a couple into a more expensive house, one that earns the salesperson a higher commission. If our couple uses the effective tax rate of less than 13%, the savings on that monthly mortgage payment is only $83. Many financial decisions are made “at the margin” but this is not one of them.

Also on the cutting board is a reduction in the amount of pre-tax contributions a person can make to a 401K retirement program.  Higher income earners would be trading in that tax break for lower tax rates, but the finance industry is sure to balk.  They make billions of dollars in administrative and trading fees for these retirement programs. In addition to the taxpayers who receive the benefits directly, tax breaks have protectors who benefit indirectly from the break. Together, this minority fights for their interests.

Soon after the last tax reform was passed in 1986, members of Congress began adding tax exclusions. Republicans may be able to pass a reform bill under a Budget Reconciliation rule in the Senate, which requires only a 50-vote threshold. Their slim majority in the Senate and a lack of cooperation from Democrats means that passage of a reform bill is vulnerable to just a few Republican defections. This is how health care repeal or reform was defeated earlier.  It can happen again.