For the past two months, the stock market’s volatility has doubled from late summer levels. The Fed announced its intent to continue raising interest rates in 2019 at least two times, and the market nosedived in response. It had been expecting a more dovish policy outlook from Chair Jerome Powell.

What does it mean when someone says the Fed is dovish, or hawkish? Congress has given the Fed two mandates: to manage interest rates and the availability of credit to achieve low unemployment and low inflation. That goal should be unattainable. In an economic model called the Phillips curve, unemployment and inflation ride an economic see-saw. One goes up and the other goes down. To rephrase that mandate: the Fed’s job is to keep unemployment as low as possible without causing inflation to rise above a target level, which the Fed has set at 2%.

There are periods when the relationship modeled by the Phillips curve breaks down. During the 1970s, the country experienced both high unemployment and high inflation, a phenomenon called stagflation. During the 2010s, we have experienced the opposite – low inflation and low unemployment, the unattainable goal.

Convinced that low unemployment will inevitably spark higher inflation, the Fed has been raising interest rates for the past two years. The base rate has increased from ¼% to 2-1/2%. The thirty-year average is 3.15%. Using a model called the Taylor Rule, the interest rate should be 4.12% (Note #1).  After being bottle fed low interest rates by the Fed for the past decade, the stock market threw a temper tantrum this past week when the Fed indicated that it might raise interest rates to average over the next year. Average has become unacceptable. 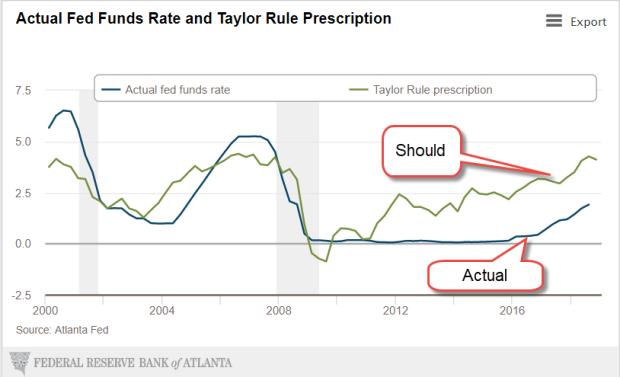 In weighing the two factors, unemployment and inflation, the Fed is dovish when they give greater importance to unemployment in setting interest rates. They are hawkish when they are more concerned with inflation. The Fed predicts that unemployment will gradually decrease to 3.5% this coming year. Unemployment directly affects a small percentage of the population. Inflation affects everyone. The Fed’s current policy stance is warily watching for rising inflation.

The stock market is a prediction machine that not only guesses future profits, but also other people’s guesses of future profits. As the market twists and turns through this tangle of predictions, should the casual investor hide their savings in their mattress?

These past five years may be the last of a bull market in stocks; 2008 – 2012 was the five-year period that marked the end of the last bull period that began in 2003 and ran through most of 2007. Here are some comparisons:

For the ten-year period 2008 thru 2017, the stock mix earned 7.7%. The bond and cash mix returned 3.54% and the blend of the two gained 6.35% annually. On a $100 invested in 2008, the stock mix returned $13.5 more than the blend of stocks and bonds. However, the maximum draw down was wrenching – more than 50%. The $100 invested in January 2008 was worth only $49 a year later. Whether they needed the money or not, some people could not sleep well with those kinds of paper losses and sold their stock holdings near the lows.

The blend of stock and bond mixes lost only a quarter of its value in that fourteen-month period from the beginning of 2008 to the market low in the beginning of March 2009. The trade-off between risk and reward is an individual decision that weighs a person’s temperament, their outlook, and the need for to tap their savings in the next few years.

A rough ride in stormy seas tests our mettle. During the market’s rise the past eight years, we might have told ourselves that our stock allocation was fine because we didn’t need the money for at least five years.  If we are not sleeping because we worry what the market will do tomorrow, then we might want to lower our stock allocation. Sleeping well is a test of our portfolio balance.