Indicators of business activity and confidence have all been strong.  The Purchasing Managers Index, the monthly employment report, and the NFIB small business index have shown exceptional strength in the past several months.  A week after a strong employment report came the worrisome news that retail sales declined for the third month. 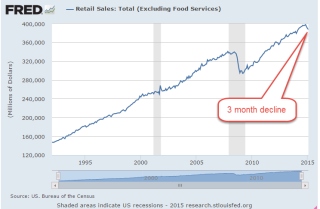 A 2% drop in auto sales was the primary driver of February’s decline but the lack of demand is evident in the broader economy.  Excluding auto sales this is the second three month period of declining sales since the recovery began.  Following the slump in 2012, the SP500 sagged about 7%.  The market’s response to this slump has been muted so far.

American businesses had hoped that their customers would spend the dollars saved at the gas pump but consumers may be tucking away some of that cash. The slowdown in retail sales may be partly due to the harsh winter in the east, or a lack of income growth.  The strong dollar has made American products more expensive to export so businesses are especially dependent on domestic demand. Since last summer, prices at the wholesale level have declined steadily.  Commodities other than oil are also showing slack demand.

The inventory to sales ratio has climbed abruptly in the last half of the year.  Businesses make their best guess in anticipating future demand.  A capitalist economy is based on the decision making of millions, not a central committee of a few.  If inventories continue to mount, we can expect that businesses will adjust to the new environment and rein in production and expansion plans. 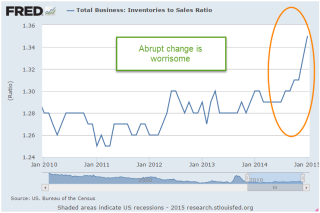 *************************
Retirement
Twenty years ago I read articles on portfolio diversification like this one and was glad that I wasn’t old enough to be concerned about that kind of stuff.  Then one morning I was shaving and noticed that I was developing a slight turkey wattle in my neck, the same thing I had noticed in my Dad. OMG! I was getting old!
A Bankrate.com blog post features a chart of savings goals that a person at each stage of life should have accumulated to ensure that they can maintain their living standard in retirement.  The benchmarks are based on one’s current income.  Many Americans do not even meet these modest goals.  According to the chart, a person making $60K  who retires at 67 should have $500K in savings and investments.
*************************
Apple
Telephone and radio were the high tech firms of the early 20th century.  In 1916, ATT was added to the Dow Jones Industrial Average (DJIA), acknowledging that the company had become a pillar of the American economy.
At the close of trading on March 18th, almost a hundred years later, ATT will be dropped from the DJIA and replaced by Apple, a high tech firm of the 21st century.  Apple’s projected earnings growth for this year may cancel out the anticipated negative earnings growth of the DJIA but Apple is a more volatile stock than stodgy ATT so daily price changes in the index are likely to be a bit more dramatic.
*************************
Budgeting
Last week, economist Greg Mankiw wrote a piece in the New York Times explaining the recent change from static to dynamic budget scoring in the new Congress.  These are two different methods for estimating the effects of proposed tax changes on the budget over the following ten years.  Static scoring, the previous system, has been in place for decades and assumes no changes to the economy resulting from the proposed tax changes.  Dynamic scoring estimates changes in GDP and revenues resulting from the tax changes. Several examples illustrate differences between the two types of scoring.  The article is well written and easy to understand without the use of complicated economic models.